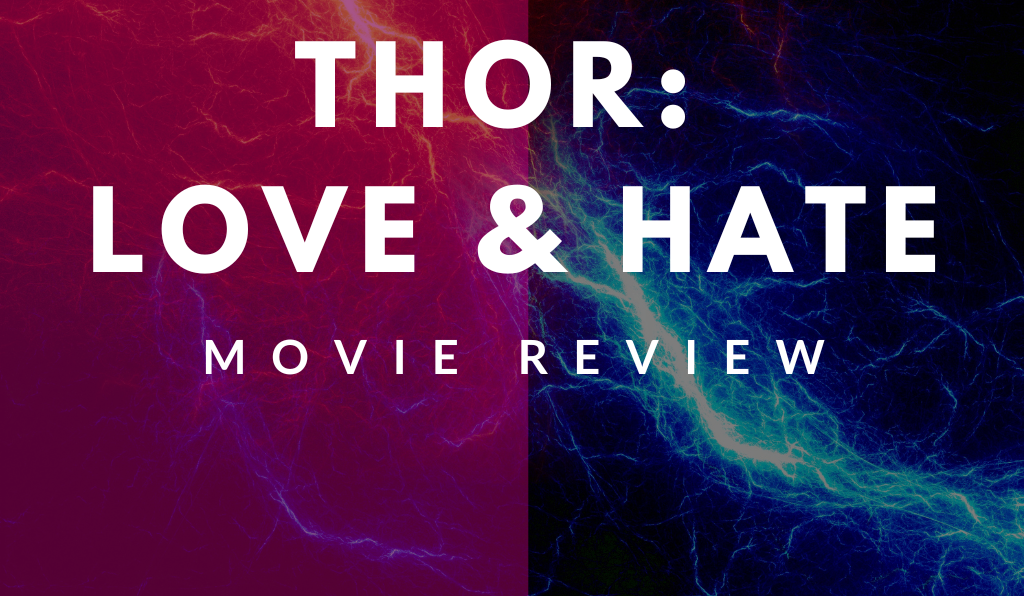 “Thor: Love and Thunder” was released in theaters on July 8, and was released on Disney+, the Disney streaming service, on September 8. The movie was directed by Taika Waititi, and runs 1 hour and 59 minutes. IMDb shows a rating of 6.4/10, meaning it was mostly well-liked. However, our editorial staff had their thoughts to share.

Watching “Thor: Love and Thunder” at the cinema was quite an experience. The first scene, spectacular work from Christian Bale, sets a grim tone on the side of the antagonist. But, we also see the side of the gods, which has its own duality. The colors and tone seem cheery and almost cartoonish, but the first god we are introduced to is also cartoonishly flat. He’s your typical “I’m better and a jerk to everyone around me.” This continued shift between grim and bright and comedic draws a fine line between cinematic/screenplay mastery, and being a hot mess. I enjoyed the similarities of style between “Thor: Ragnarok”and “Thor: Love and Thunder,” but while “Thor: Ragnarok” felt like it fit well in the Marvel cinematic universe, while using a fresher storytelling style, “Thor: Love and Thunder” feels a little more disconnected. There’s a lot to cover in this movie, and that’s part of the problem. The acting was great, the comedy well-timed, and the darker scenes still had a heavy impact, but there is so much detail and continuation in the movie. It expands from the events of “Endgame,” with more views of the new ‘Kingdom’ of Asgard, and its new leader [name], and expands on Jane Foster’s storyline, and then adds Heimdall’s son, and introduces a whole set of traditions/settings in which Thor and his group interacts with other gods and realms. While I love word building and was definitely wanting detail, I don’t know that all the detail in this movie was necessary. One specific plot point is the main reason I can’t definitely say whether or not I liked this movie.
The plot is relatively simple, which isn’t necessarily good or bad. A faithful, honest man is turned corrupt and evil by power and anger, and must be stopped by the protagonist (Thor), who enlists the help of his friends. The group, however, encounters their own conflict when observing events that make them better understand the antagonist’s motivation or perspective. On this side of this main plot is quite a lot. One side plot is Jane Foster and Thor’s relationship. I heard the most complaints on this, but I think, for the most part, the feelings were decently believable and at the very least provided some great comedy with the parallels between Jane/Thor and Mjolnir/Stormbreaker. However, the most annoying, most irritating, and unnecessary side plot was a group of children being kidnapped and then turned into a mini-god army that fought with Thor. I really wish I could erase the memory of seeing a bunch of small children wielding random weapons while screaming and destroying enemy entities. I know Marvel is aimed at younger generations, but to me, glamorizing and depicting five- to eight-year-olds committing violence is not only tasteless but such a glaring eye-sore on an otherwise good movie.
I laughed, cried and cringed, and so remain conflicted on how I feel about “Thor: Love and Thunder.”

Thor: Love and Thunder is so controversial in critic’s reviews but ultimately one of my favorite new Marvel movies. This movie was not created to be a perfect emotional cinematic masterpiece but it is instead trying to set us up for the next section of movies to come out.
We start out the movie with a beautiful, however heart-wrenching, scene of Burr, played by Christian Bale, losing his daughter, played by India Rose Hemsworth, which sends him down a dark path moments later. I didn’t watch this movie in theaters but watched it at home when it was released on Disney+ and I watched it with my dad so this movie started and really hit home for me personally. Burr’s pain and anguish from losing his daughter then being ridiculed by a god he claimed his savior seemed very real and set up his character’s story very well.
There was a lot of hate regarding Thor, played by Chris Hemsworth, and Jane Foster, played by Natalie Portman, and their relationship through the movie. It was an awkward weird mix of tension and feelings which I think was extremely real and authentic. I think most people could imagine themselves going through that weird stage of trying to be friends after a relationship ends when there are still feelings that are being suppressed.
I loved the interpretation of the mythical gods and their personalities. I think overall one of the biggest problems people had with this move was the violence that surrounded the kidnapped children. Do I think this was the smartest move? No, I think they could’ve had better motivation but honestly seeing that one little girl with her bunny completely destroying some of the shadow monsters was incredibly funny. I personally liked how Thorhad a little army because to me it seemed inspiring and it showed that you can be a hero and do important things no matter your age.
I really enjoyed this movie and I am so excited to see what comes next. I love the ending and I am super excited to see the new characters’ progression through the next few movies if they continue to show up. I think this movie is definitely something you should watch if you haven’t yet.

About the Writer
Rebekah Bushmire, Editor-in-Chief

Rebekah Bushmire has been on The Trail staff for going on three years and will be serving as the editor-in-chief for the 2022-2023 school year. She is...

Thor: Love and Thunder is a masterpiece of what the Marvel Cinematic Universe is: off-timed jokes, general plot holes, and an abyss of potential that was never allowed to be.
Some might say I’m being unnecessarily cruel, and it’s absolutely true. I’m a comic book fan, which means I eye movie-adaptations of these same comics books with a lot of unfairly deserved wariness and judgment. I’ve never forgotten how bad a hand Ryan Reynolds was dealt in ‘Wolverine: Origins’ and never will. But the newest Thor movie wasn’t just a poor adaptation; it was a bad movie.
Right off the bat in the movie, we have Christian Bale truly giving it his all in a movie, despite the fact that he’s in a movie where he could basically do nothing and be paid a million dollars. Bale plays Gorr, the antagonist of the film, with an intensity of grief and anger that should surely put the tone of the movie somewhere near somber and reflective.
This is not the case, and for the next two hours of the film, each moment that should be at least pushing the movie into a more mature tone is offset by jokes that would generally not be ones that someone should be making at that time. This is not to say that there shouldn’t be jokes in movies or that every good movie has a no-nonsense, macho theme where no character is allowed to smile ever. This is to say, that maybe after a scene where small, defenseless children are kidnapped by someone who may or may not kill them, the two heroes of the film should not be joking about their relationship status.
And speaking of relationship statuses! Watching the film, it’s almost like the movies should have put more time and effort into Thor and Jane’s relationship with each other, because watching them interact with each other now is like two strangers flirting. And before someone says ‘But they dated! Didn’t you watch the movies?’, I did. It was painful. Thor had more chemistry with the script he was obviously reading from than he did with Jane Foster.
Then, of course, we have Valkyrie’s third appearance in the MCU, which was underwhelming at the most.

Marjorie Smedley is the Opinions Editor on the McIntosh Trail, and has been on staff for two years. A senior at McIntosh, Smedley moved back to Georgia...