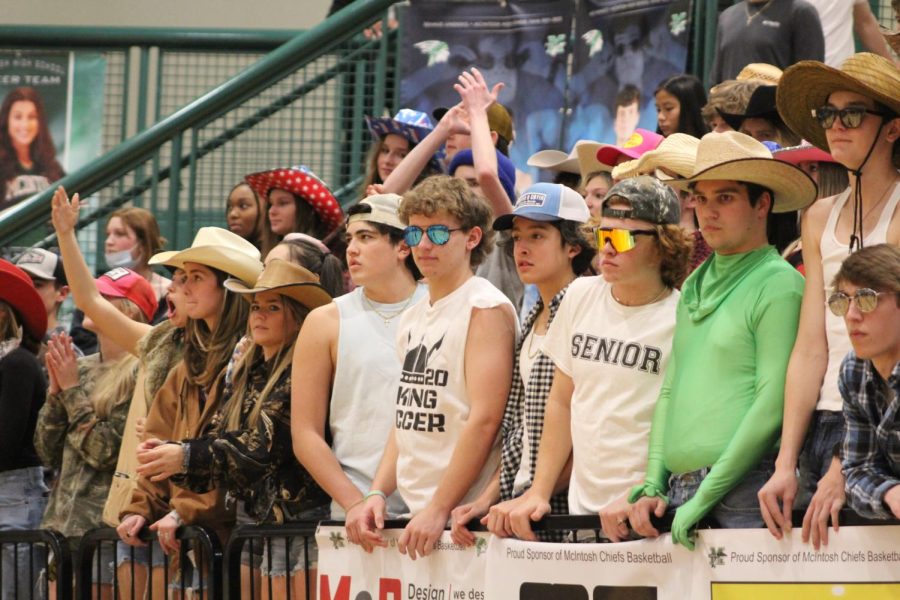 Pictured above is the student section during a game against Northgate high school. The theme for this game was "western." Photo by Tracy Guo

The student section at any high school or college game can consist of some of the most die-hard fans. From the Spike Squad at UGA football games to the Green Man at McIntosh basketball games, the student section is the best place to show your school spirit.

George Preble, a senior at McIntosh, was elected by the student body to be the Green Man. The duties of the Green Man are to, “keep the student section hyped and excited about the game,” Preble said. “While also being crazy and out-of-pocket.”

There was no shortage of out-of-pocket attempts to distract the other team while they shot free throws. The Green Man crowd surfed, jumped from several rows up to the bottom of the student section and even reenacted a birth among other antics to draw the other team’s attention away from the game.

A student section isn’t just for the spectators though. Athletes love to hear the roar of the crowd and feed off that energy.

“Playing for my home crowd… can’t beat it. Especially Starr’s Mill. That energy was crazy and I had so much adrenaline,” Hayden Logan said, a senior basketball player.

“The student section gets the players more eager to play… I think it makes them feel like they are playing in the NBA and I think that’s so cool,” Catt Bach said, a senior.

This year in particular the student section seems extra enthusiastic about the Chiefs basketball games. When games are hosted at McIntosh it’s not unusual to see the students section almost at full capacity. To add another layer of involvement for the students; there is usually a theme that the student body decides on. Word about the theme spreads on social media. Themes have ranged from “under the sea” (attire consisted of swimming goggles, suits, flippers, beach towels and floaties) to “hard hats and kitty cats” (guys wore construction equipment i.e. hard hats, neon vests, and brought construction zone tape while girls dressed up to look like cats).

“I really liked all the themes. The weird themes that required a little more effort were always really fun,” Bach said, who was always ready to support her Chiefs on the front row. “Hard hats and kitty cats was funny. The twin theme was fun; that’s where I dressed up as the Green Woman when I twinned with the Green Man. Under the sea theme was also super fun.”

At the end of the day, the deciding factor on whether or not a team wins or losses is up to the players and how they compete, however, Preble believes that some of the team’s success this year was partially due to the student section, “especially against Starr’s Mill we were able to get our team back into the game after being down by a lot of points.”