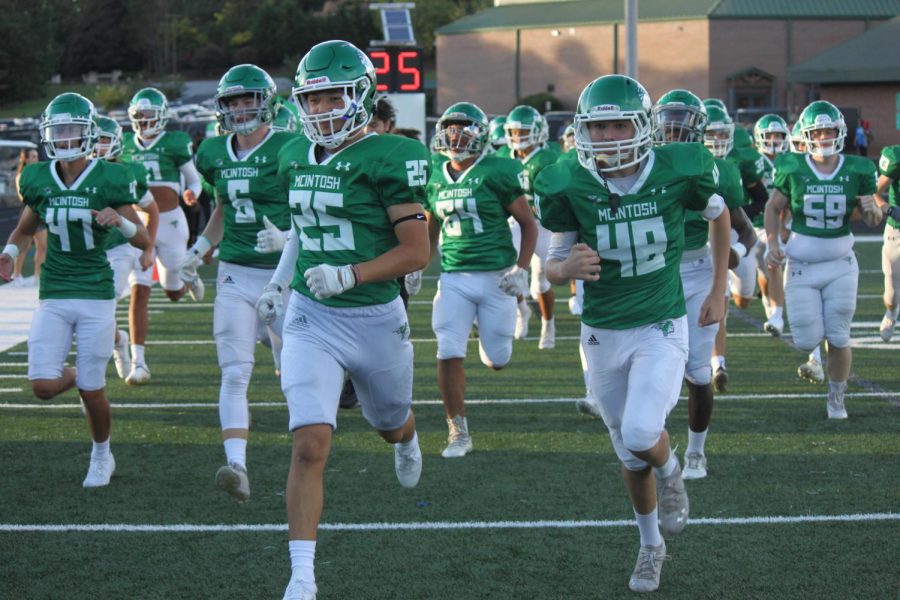 On Fri Aug. 27 the McIntosh Chiefs hosted the Lagrange Grangers.
Originally, McIntosh was scheduled to play Hampton High School. “I just received official word that the game against Hampton this Friday night is canceled due to COVID-19 reasons,” said Head Coach Lee Belknap when interviewed last week about the scheduling change. This left McIntosh to find another opponent. Other schools; LaGrange being one of these, also had opponents cancel on them due to COVID-19. The Chiefs and the Grangers agreed to play each other.
The grangers took control in the first quarter and were able to hold onto that lead to win 57-14. “I feel like we didn’t execute to our full potential. A few tweaks and we’ll be right where we need to be,” senior Blake Hiley said.
The Chiefs kept fighting through the first half though, scoring two touchdowns with several memorable plays. In the first quarter, QB Tate Morris completed a pass to RB Blake Hiley for a large gain to get us into scoring range. In the second quarter, “#9 Tate Morris with a long pass to #7 Isaiah Mintah. McIntosh has the ball on LaGrange’s 41-yard line. LaGrange 27, McIntosh 14,” said Paul Bednarowski, the MaxPreps score tracker for McIntosh.
McIntosh’s offense, however, slowed down in the second half. The Chiefs weren’t able to score and Hiley attributed that to the team being, “in our own heads. This sport is not only physical but mainly mental.”
This Friday the chiefs are scheduled to play Fayette County High School in “the battle for 54.” This long-standing rivalry of the two schools that are located on Highway 54.
Come out and support your Chiefs. Tickets can be bought on GoFan.