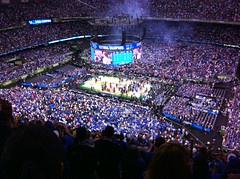 In an unprecedented turn of events, the NCAA announced Thursday that this year’s NCAA Tournament, commonly known as March Madness, will take place with only essential team personnel and limited family in attendance to watch the contests.

The announcement, of course, comes in the midst of the coronavirus outbreak, which was declared a pandemic by the WHO earlier this week.

Professional leagues, such as the NBA, have already suspended their seasons as a result of the outbreak, which has led many to speculate whether the NCAA will follow their lead and cancel the tournament altogether, which certainly seems like a possibility given all of the mind-numbing developments within the last 24 hours.

Conference tournaments, which are taking place now, have similarly made the decision to start playing without fans starting Thursday, so if this police does carry over to the big dance, the players should at least be prepared.

Whether there is a fan-less tournament or no tournament at all, March will certainly be as “mad” as advertised this year.