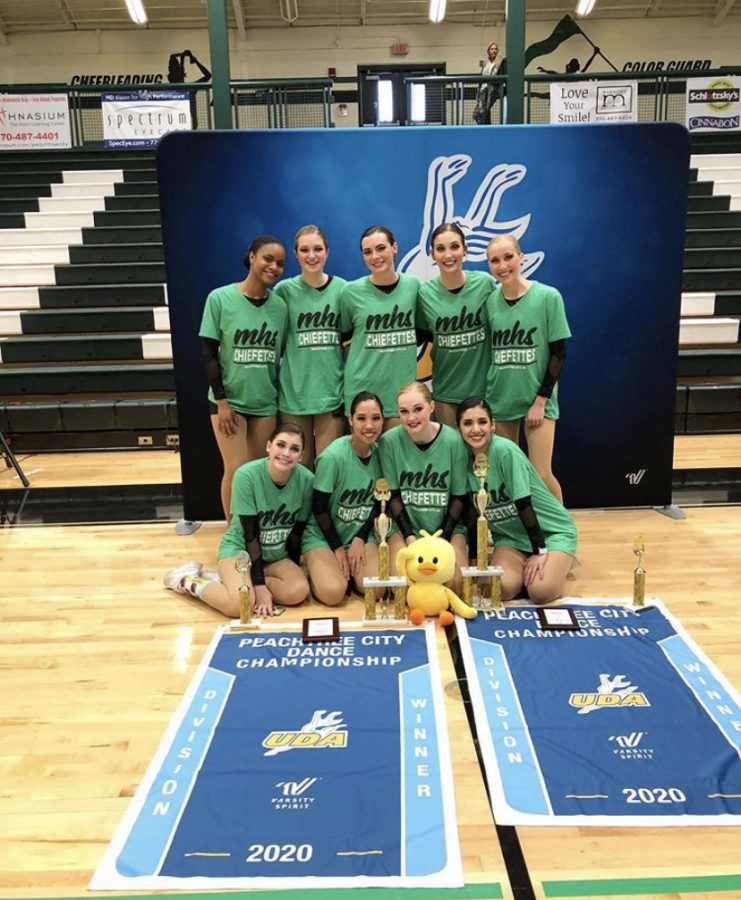 The Chiefettes take a photo in front of the UDA Peachtree City dance poster after winning state for the 11th time in a row. "It was kind of stressful, because it was a super busy time for us as we had nationals and out of state competitions every weekend leading up to state" said Senior Ally Cullen when asked about preparing for her solo and the competition.

For 11 years in a row, the Chiefettes came out on top and became state champions. This past weekend on Feb. 8, the Chiefettes hosted the annual UDA Peachtree City dance competition in the McIntosh gym. Countless teams came from across Georgia to compete in this competition. All of the proceeds collected from the competition went towards the Chiefettes funding for future seasons.
The Chiefettes have been working endlessly to make sure that their routine was the best it could be. Even though the state championship is done, the Chiefettes don’t stop working. Tryouts for the new season begins in April. The team also has a camp that they go to during the summer that helps with technique for the upcoming season. “We’ve been working on our routine for this competition since June,” said sophomore Marissa Cooper, “working for that long really helps us perfect the routine.”
The Chiefettes ended up getting 1st place in the Jazz category and 2nd place in the Pom category. Jazz routines are a little bit similar to contemporary routines. They are emotional and require a lot of technique. Pom routines are lively and fun to watch. Ally Cullen placed 3rd in the Senior Solo division and Joelle Nicosia placed 1st in the Senior Solo division.
Winning for head coach Carmen Yarbrough was unbelievable because they had been working so hard for so long and the work was finally starting to pay off. “I’m not sure if another team can say that they’ve won a competition 11 years in a row,” said Yarbrough, “With it also comes a lot of stress. For as long as anyone can remember, we have won at least 1 first place “UDA State Championship” so it has become the norm for our program.”
The Chiefettes will have to compete at an invitational on Saturday, Feb. 15 from 8:00 am to 5:00 pm.