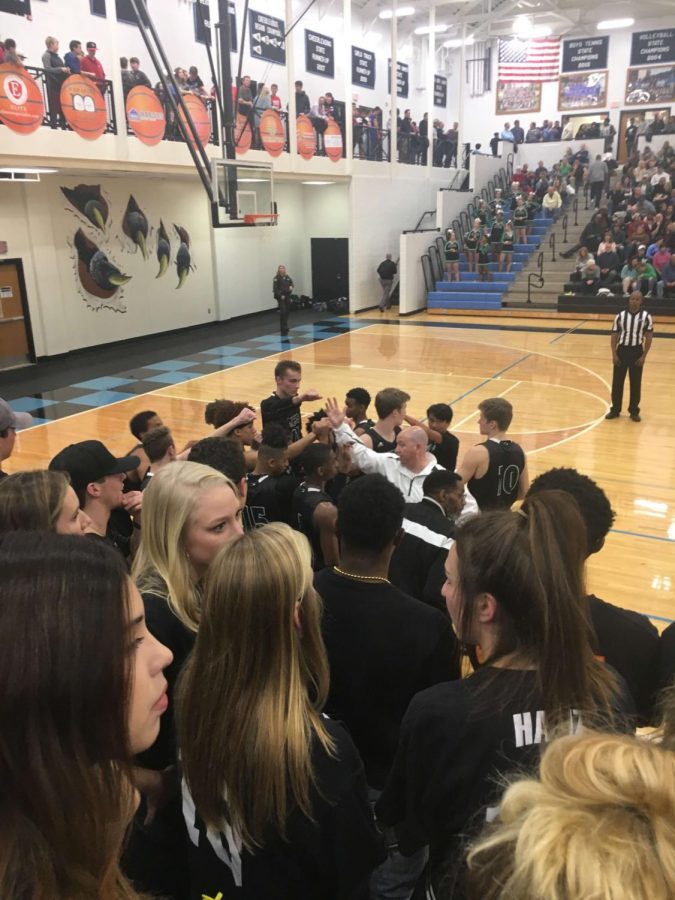 The Chiefs huddles before the start of the Battle of the Bubble.

After having unexpected snow days, the Fayette County School Board decided to allow extracurricular activities after 2 p.m. to take place last Friday, so the Battle of the Bubble, an annual basketball game between county rivals, Starr’s Mill and McIntosh, took place. The Chiefs student section decided to make the game a blackout as the teams were playing away at Starr’s Mill.

The Lady Chiefs tipped off first. They trailed 18 to 10 at the end of the first quarter with fourth year varsity player, Kimmy Edgeworth, hitting two three pointers for her team. At halftime, the Lady Chiefs trailed 27 to 22. They came back stronger the second half and were able to catch up to the Lady Panthers to trail by one with three minutes left in the third quarter. Both teams went back and forth with scoring, but the Lady Panthers went down the court with 15 seconds left in the game and hit a three pointer. The Lady Chiefs got the ball back with eight seconds left in the game. They lost with a final score of 52 to 49.

Edgeworth said, “Starrs’ Mill will always be one of the best rivalries around. It was super upsetting losing to them, although it was a very intense game. We fought till the end and gave it our all but just came up short of a win. I am very proud of my teammates and their hard work.”

The Chiefs trailed the Panthers 10 to 7 at the end of the first quarter. The Chiefs were behind 22 to 14 at halftime, having not scored any baskets until there were five minutes left in the second quarter. At the end of the third, Starr’s Mill still held a lead with a leading score of 41 to 24. With 54 seconds left in the game, the Chiefs had the ball while trailing by 8. After scoring again, the  boys had the ball at the line with 33 seconds left in the game. Despite coming back stronger in the second half, the Chiefs fell to Starr’s Mill with a final score of 58 to 48.

Junior Andrew Pinckney said, “We started the game really slow and lethargic and we were not able to play at the pace that we wanted. We were able to pick it up in the fourth and we became more urgent. We made a run to get back into the game, but it wasn’t enough to erase the three quarters of bad team basketball we played.”

Senior Keagan Galbraith said, “The game was really fun but it was super upsetting that we lost. Hopefully we can win the next game.”

The Lady Chiefs and Chiefs play away tonight, Jan. 24, against East Coweta. The next home game is this Friday against Riverdale, and the teams will celebrate senior night.