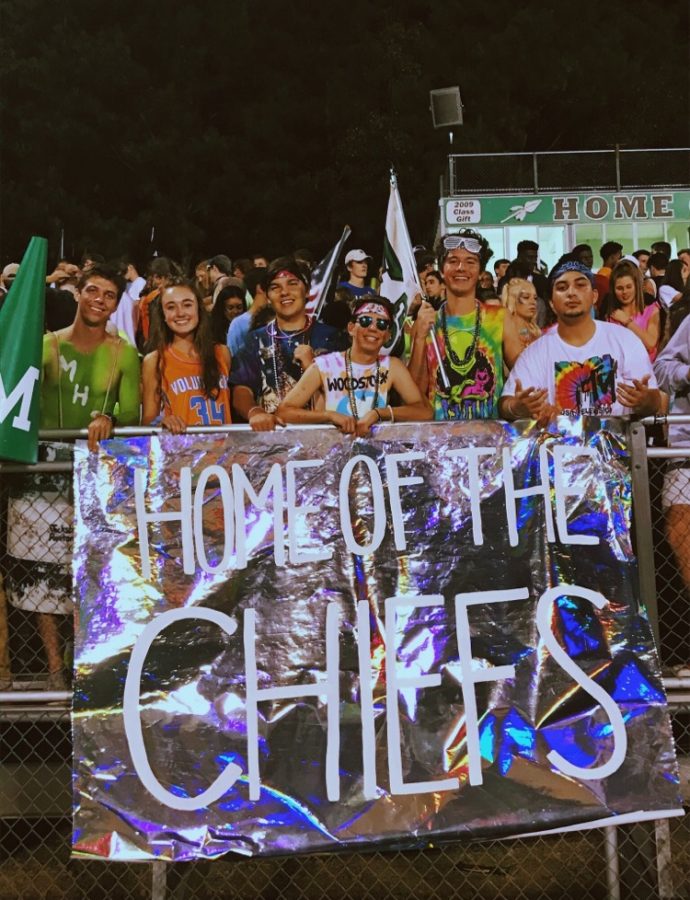 Seniors go all out for the rave themed homecoming game against the Riverdale Raiders.

After their 27-8 victory over the Riverdale Raiders, The McIntosh football team remains undefeated, with a record of 5-0 and a region record of 1-0. The team faced the Raiders at home on Friday, September 21, in honor of Homecoming, and their win ended Homecoming week on a positive note.

Senior Connor Koscevic, also known as “barrel-man,” is in charge of starting the chants during football games.

Koscevic said, “It’s been awesome to see the community rally behind our football team. I’m super excited of our program and their 5-0 start because it’s a testament to everything they’ve done throughout the summer and season. Being able to put together a student section has been great because it allows us to do more cheers and makes the game a lot more fun. It’s neat to see the team feed off of the energy that we bring.”

After Riverdale was unable to convert on a fourth down conversion midway through the first quarter, the Chiefs got the ball back and Junior Dane Kinamon threw a 56 yard touchdown pass to Senior De’Andre Wade to give the chiefs a 7-0 lead right before the end of the first quarter. Senior Bradley Ector ran for a 38 yard touchdown run early in the second quarter to give the chiefs a 14-0 lead and less than 6 minutes later, Senior Bradley Ector was able to score again off of a 1 yard touchdown run. The Chiefs led at halftime with a score of 21-2 after Riverdale was able to get a safety late in the second quarter.

Junior Dane Kinamon said, “It’s been fun playing with guys that enjoy competing and playing as hard as they can. I also think our whole team has really bought into our team motto of our team as a family and trying to make this a special season.”

The Raiders scored a touchdown to cut the lead down to 21-8 after a the Chiefs failed their attempt at a 2 point conversion at the end of the third quarter.

With 5:27 left in the game, senior Bradley Ector ran 74 yards for the last score of the game. Ector scored three rushing touchdowns for the chiefs against the Raiders. McIntosh won with a final score of 27-8. Their next game is at Fayette County on Friday, October 6.