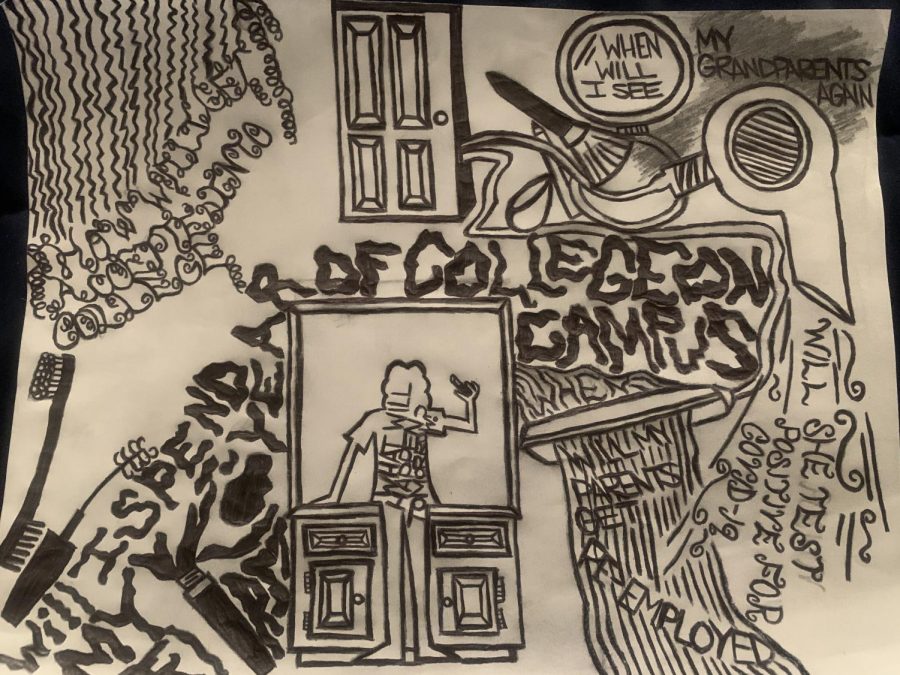 This illustration depicts a teenage girl locking herself away in her bathroom for hours trying to cover up all the worries that she has regarding to COVID-19 by focusing on her physical appearance instead of trying to reach out to a person who know may know the answers to her questions. This illustration is meant to send the message that a person devoting to much of their time while being quarantined to trying to enhance their physical appearance can hinder them from learning how to adapt to their circumstances at this time. A teenage girl is depicted in this illustration, but anyone can be a victim of doing this to escape their COVID-19 worries.

Although, being quarantined can feel lonesome at times, I think that it has given me the chance to learn more about myself as a person. I never would have thought that I would have to introduce myself to myself. Without any thoughts about whether or not I would arrive to class on time before the tardy bell rings and how I would attend an event for an extracurricular activity bombarding my mind, I have refocused my mind on my priorities. During the school week, I hardly ever get the chance to spend time with my family since we all have our own agendas, but I am spending every second of the day with my family now which has always been something that I have wanted to prioritize more. Staying organized is another one of my priorities that I have focused on while being quarantined since as soon as I learned that I was not going to be attending school anymore due to COVID-19, I dumped everything from the bag that I carry my school belongings in and began to reorganize all my binders and papers. Goal setting is also one of my priorities that I have focused on while being quarantined since I believe that setting goals for yourself is necessary for progress. I have also critiqued my physical appearance while being quarantined as well.
I have not been spending hours in the mirror nitpicking every little thing about myself since I can utilize that time to improve the physical qualities about myself that I don’t quite like instead of dwelling on them. I am of course doing all the things to maintain my hygiene, but I am also setting aside a day out of the week for a wash day since I did a mini chop on my hair in January to get rid of the straight ends of my hair from heat damage. I can look at the length of my hair all day if I wanted to, but doing that would not make it grow any faster which is why I just continue to take care of my hair to the best of my abilities. The same can be said about the breakouts on my face since all I can do is maintain a better diet and keep washing my face with a cleanser each day. I am not trying to send the message that pampering yourself while being quarantined will hinder your growth as a person since I am only trying to send the message that dwelling too much on your physical appearance while quarantined can distract you from the journey that you’re on to becoming your best self that you can possibly be.
My inspiration for becoming my best self that I can possibly be while being quarantined came from a novel that I read for English this semester which was The Count of Monte Cristo by Alexandre Dumas. Edmond Dantés who is the main character of that novel is the character that I can see myself in the most at this time. The comparison may sound quite odd since Dantés is a young French sailor during the 1800s who plans on marrying his true love until he is falsely imprisoned for fourteen years which changes him from the jovial and kind young man that he once was into a revenge-seeking man who now goes by the name of Count of Monte Cristo after escaping from prison and who plans on making all the people who caused him to be imprisoned to suffer as much as he did. The only thing that Dantés and I have in common is that we’ve both chosen to morph into new versions of ourselves while being isolated, and the new version of myself that I have decided to morph into is a person who is more productive and even more creative. Use this time to cultivate yourself as a person.

Motivation may be tough to find now, but inspiration can be found even during the darkest days. When I feel like I just don’t want to keep going anymore, I send my family members and friends positive messages since I feel like if I’m not smiling why shouldn’t anyone else not have a smile on their face. Hearing my family members and friends respond to those messages by telling me that it made their day gives me the urge to keep going. I also like to take the time to count my blessings since I may not have what I want right now, but I think that it is important to acknowledge everything that you do have. Dantés also struggled with motivation in terms of wanting to escape from prison until he realized what he did have which is something that we all need to do in order to escape and to reach our own treasures on the Island of Monte Cristo which was given to Dantés by Abbe Faria who was Dantés’s only companion while imprisoned. The treasures that I hope to find after being quarantined is over are new memories that will be made with my family and friends without being six feet apart. The words that I would like to leave you with before you go off and begin your transformation as a person for the better while being quarantined come from The Count of Monte Cristo by Alexandre Dumas.