OPINION: Music Doesn’t Have a Race 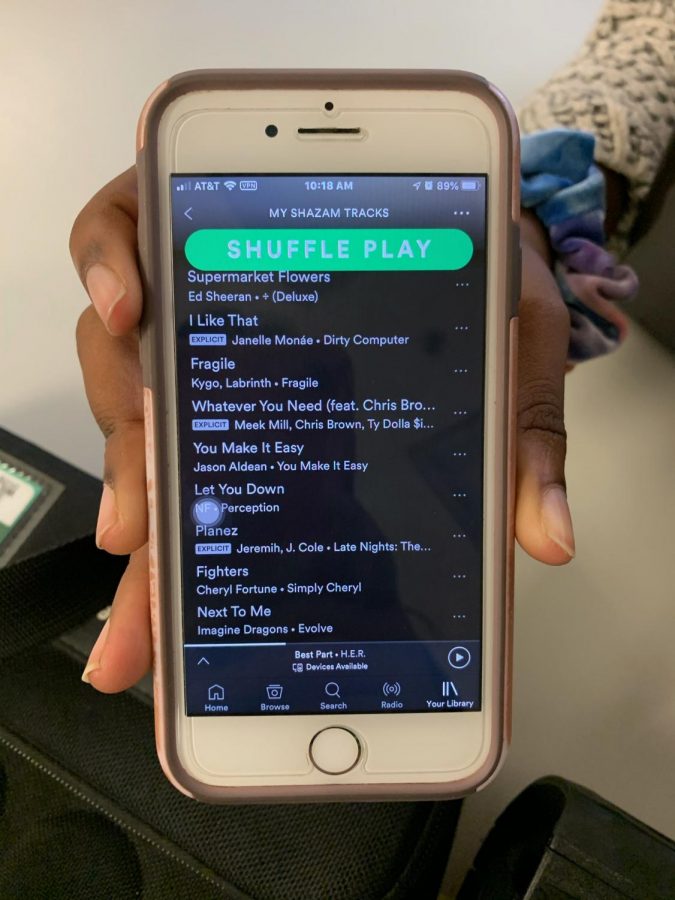 McIntosh Trail News Editor Jordyn Mobley shows the diverse range of music that she has on her Shazam tracks playlist.

When I pop in my earbuds and listen to music, I feel like all my cares in the world melt away until someone peers over my shoulder and gawks at me. The person isn’t gawking at me for still using wire earbuds instead of AirPods, but they’re looking at the artists on my playlist rather than the song. At first, the person looks at me in astonishment due to my music choice and then they ask me the reason why I chose to listen to that particular artist. First, I should probably list some of the artists that are currently on my playlist which are Ariana Grande, Khalid, Monsta X, Lizzo,Why Don’t We, Cardi B, and Billie Ellish just to name a few. Just because I don’t look like some of the artists that I listen to that doesn’t mean I can’t listen to their music.

Music is a part of everyone and everything in my book because no matter where you go it’s always there. From the music playing in the elevator to the pitter-patter of feet that you hear in the hallway. Music is the soundtrack to our lives and the lives tied to ours referring to the generations that came before us. I listen to a diverse range of music now and that resulted from the music that I heard growing up. I can still picture by grandmother dancing around the house while listening to the Temptations and hearing my mother reminisce over attending her first Run-D.M.C. concert. Although all those artists mentioned are of the same race as I am, that still prompted me to be my own person when it came down to having my own choice of music. I know that music is a part of me and my culture, but I just hate it when I’m looked at as a trader for listening to various artists who aren’t of the same race.

As I mentioned before, there are more artists on my playlist that I listen to which include artists who are of the same race as I am, such as Normani, Blueface, and Juice World. I don’t just listen to their music because they’re the same race as I am. I listen to their music because I enjoy listening to it just like all the other music that I listen to. From time to time I even catch my mother dancing to “I Don’t Belong In This Club” while preparing dinner and trust me I know that she loves their music as much as I do.

Race shouldn’t restrict your music choice. Music is meant for expressing your thoughts and feelings, so why should a person restrict themselves to only listening to music by artists of their same race. I’m definitely not saying that all artists of the same race create music with the same message in mind. If music is the soundtrack of my life, I wouldn’t want to hear the same song by the same artists everyday, but that’s just my opinion. You do you with your music choice. It doesn’t hurt to expand your horizons by listening to different music by artists of different ethnicities.