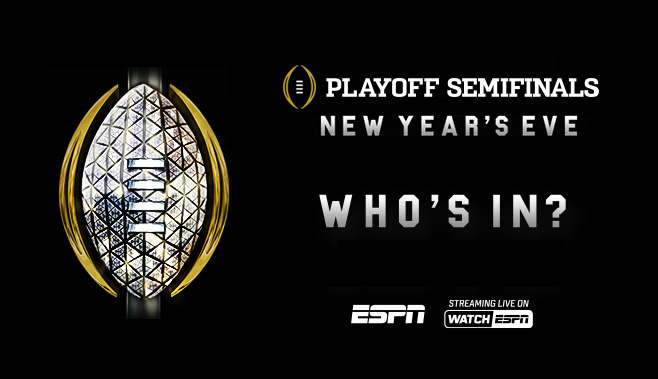 The regular season for college football is over, which means that conference championships are right around the corner. Some people love the conference championships because for some teams, it can determine who makes it into the College Football Playoffs, but for others, it doesn’t matter the result, it’s just a conference championship. Not saying that winning a conference championship isn’t a big deal, but now it almost seems as if it isn’t that big of a deal because depending on where the team is ranked, it possibly won’t affect the chances of them getting into the playoffs. There are so many drawbacks to only having a four team playoff, which is why changing the four team playoff to an eight or sixteen team playoff would be more efficient. American football is the top watched sport in the country at the moment. If the NCAA decided to change the number of teams in the College Football Playoffs, they would only benefit from it. It could lead to more viewers and even more profit from the games.

For any college football fan, the last several years of the playoffs have been more consistent than any fan would like to see. For example, If you were to look up “College Football Playoff,”  the Alabama Crimson Tide have the most College Football Playoff appearances, five, and wins, four. I’m not saying that the Crimson Tide shouldn’t be in the playoffs, I’m simply pointing out that they are consistently winning the National Championship and not being tested by their opponent majority of the time. If the College Football Playoffs were to extend the number of teams to eight or sixteen teams, would there be a higher percentage for teams not in the top four to get significant wins and upset teams that are consistently making it into the four-team playoff that began in 2014?

Think about the college basketball tournament, March Madness. Only 68 teams “qualify” for the tournament based on their overall record and how many “votes” they receive from the committee. This is similar in how the playoffs work in the fact that the committee decides the teams that are entered, but the majority of the time the first seed and the second seed are mainly always the same as they were. The third and fourth seed occasionally change due to the result of some conference championships. Some may say that, depending on the team, the fourth seed in the playoffs could be the “Cinderella story”, but having the four-team playoffs doesn’t allow for any major surprises. In March Madness, you have the teams that mess up everyone’s bracket and make the tournament more interesting than expected. Each year, there is at least one major upset that no one would’ve called. For example, this past March Madness tournament number one seed, Virginia, lost in the first round to 16 seed, University of Maryland-Baltimore County (UMBC) and 11 seed, Loyola University Chicago, made it to the Final Four.

If the NCAA were to even just add four more teams to the playoff, it would consist of: the five power conference champions (SEC, ACC, Pac-12, Big Ten, and Big 12) the best Group of Five team, and two teams that will be added based on the amount of votes received from the committee. Sometimes winning a conference championship doesn’t benefit the team at all because it doesn’t help them enough in advancing to the playoffs, but if the NCAA were to switch to an eight-team playoff, it would only make sense for them to include all power conference champions. For example, in 2016, the playoffs consisted of 1) Alabama, 2) Clemson, 3) Ohio State, and 4) Washington. One of the major contemplations in the 2016 playoffs was when (10-2) conference champions, Penn State missed out on the playoffs; even after defeating the Ohio State Buckeyes and winning, some may say, one of the hardest conferences in college football. The Nittany Lions had begun the season with two tough losses to Pittsburgh by three on the road and Michigan by 39 on the road, which is why the Nittany Lions (ranked #5) were left out of the playoff bid.

There are many other examples of hard decisions that the committee has had to make since they College Football Playoffs began in 2014 and if they were to extend the number of teams, they wouldn’t have as hard of a time deciding “Who’s In?” at the end of each season.