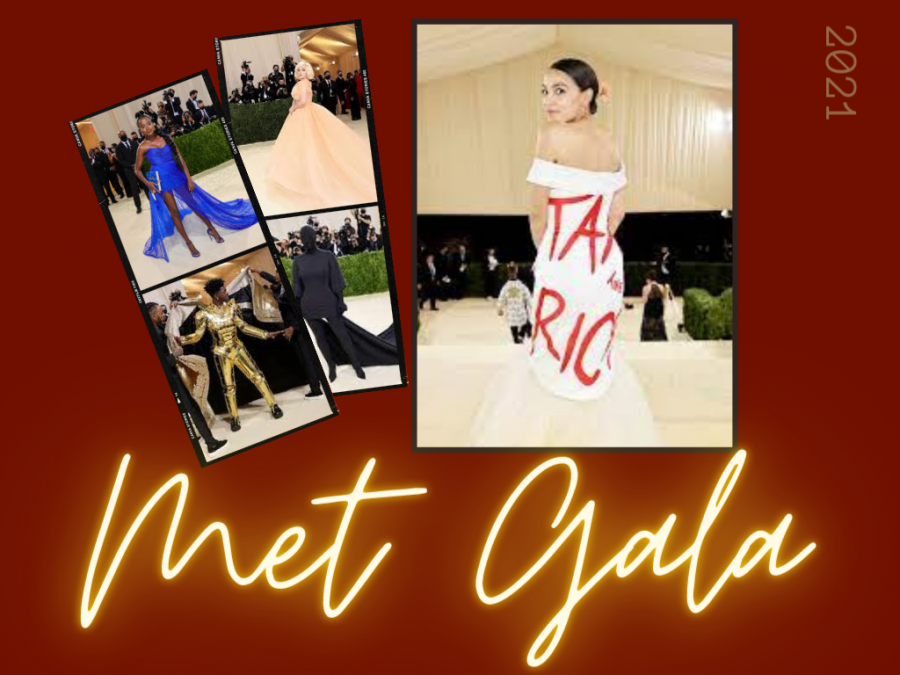 Graphic depicting 5 celebrities and their Met Gala looks from 2021, designed by Lulu Vitulo.

The 2021 Met gala was held this year on Sept. 13, after being postponed due to COVID-19. Vogue writes, “Typically held annually on the first Monday in May, the Met Gala—aka fashion’s biggest night of the year—returns this year as a smaller, more intimate affair than in years past. (The soirée was canceled last year, and postponed to this September, due to COVID-19.)” The Met Gala is a fundraiser held at the Metropolitan Museum of art in New York, and attended by celebrities, from pop stars to prominent political figures.
The New York Times calls the Met Gala “a black-tie extravaganza held the first Monday in May to raise money for the Costume Institute (a.k.a. the fashion department).”
Most attendees will pay for a ticket, which is around $30,0000. Some, however, are invited for free. According to the New York Times, “Of course, not everyone pays for a ticket. A brand will often invite celebrities to sit at its table, and…up-and-coming designers who may not be able to afford a ticket and [scatter] them around the event.”
This exception can also be for political figures, like Alexandria Ocasio-Cortez. The New York Times writes that, “Many New York City elected officials are invited as well, as “guests of the museum” who do not pay to attend.” More specifically, Politifact says, “Lauren Hitt, a spokesperson for Ocasio-Cortez, told PolitiFact that the congresswoman didn’t buy her ticket to the gala. “’She was invited as a guest of the Met,’” Hitt said.”
This year, guests included Billie EIlish, Lil Nas X, Rihanna, Jennifer Lopez, Kim Kardashian, and many others. More notably was the absence of regular attendees, such as Zendaya, Beyoncé, Taylor Swift.
One of the notable people absent was Nicki Minaj, due to the amount of attention she caught when she explained why she was not attending. “Rapper Nicki Minaj said in a series of tweets that she would not be attending Monday’s annual Met Gala due to the COVID vaccine requirement,” says NBC, “Minaj went on to share a series of bizarre claims about the shots, including a story from a cousin abroad who said he was declining to be vaccinated ‘cuz his friend got it & became impotent.’” Eventually, Minaj even caught the attention of the White House.
According to CNN, “The White House offered to connect rapper Nicki Minaj with one of the Biden administration’s doctors to answer questions about the safety and efficacy of Covid-19 vaccines, White House press secretary Jen Psaki said Thursday.”
Meanwhile, guests who did attend wore a wide range of fashion styles and designers. The Washington Post writes that, “Some celebrities wore thoughtful and creative ensembles with deep symbolism and meaning, such as National Youth Poet Laureate Amanda Gorman’s blue gown and headpiece inspired by Statue of Liberty,” as the theme of the Met Gala this year was ‘In America: A lexicon in fashion’. “The theme celebrates American designers,” says Vogue UK, “as well as cultural, political and social events that have occurred during the pandemic.”
Some celebrities went with American fashion trends from the past. Billie Eilish’s dress, for example, was inspired by Marilyn Monre. The Insider says, “The neckline and bodice looked like the dress Marilyn Monroe wore to the 1951 Academy Awards, as did Eilish’s short, blonde hair.” Another celebrity who took inspiration from the past was Jennifer Hudson. “Respect lead Jennifer Hudson brought high-octane glamour with a bright scarlet gown by AZ Factory, emulating her on-screen muse Aretha Franklin,” writes Vogue.
Other ensembles were not drawn from the past, but still pulled reactions from viewers of the Met Gala. On the outfit of Lil Nas X, the Guardian writes “[d]ressed all in gold by Versace, the performer arrived draped in a regal velvet cape….He threw this off to reveal a reflective suit of armour beneath….Then he unclasped that to show off his final look: a crystal-studded catsuit.” In contrast with the layered, “regal” outfit(s) of Lil Nas X was Kim Kardashian’s all-black dress. “Kim Kardashian West made a dramatic entrance later in the night, completely covered in black from head to toe, her ponytail emerging from the opaque head covering and trains of fabric trailing behind her,” says CNN.
Of course, there are many more looks from the Met Gala this year, but it would be much too lengthy to describe them all here. To summarize, Vogue writes that “On the red carpet, the celebrity guests embodied the theme of American style, from flashy, star-spangled ensembles, to more discreet nods to Americana motifs.” Each year’s Met Gala theme is actually carried in two parts, and according to Vogue, “Part two, “An Anthology of Fashion,” will open on May 5, 2022.”