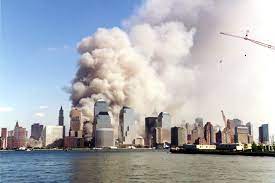 On Sept. 11, 2001 terrorist attackers hijacked four airplanes and proceeded to carry out their attack on the targets of the World Trade Center in New York City, the Pentagon just outside Washington D.C. and one more unknown location in the United States.

American Airlines Flight 11 was a domestic passenger flight that was on its way to Los Angeles from Boston when it was hijacked by five al-Qaeda terrorists. On board were 11 crew, 2 pilots, 9 flight attendants, and 81 passengers. The hijacked flight would soon be the plane that crashed into the North Tower of the World Trade Center through floors 93-99, affecting 7 out of the 110 floors in total.

United Airlines Flight 175 was also a domestic passenger flight on its way to Los Angeles from Boston when it was hijacked by al-Qaeda terrorists 30 minutes into the flight. On board were 9 crew, 2 pilots, 7 flight attendants and 56 passengers. Flight 175 would hit the floors 77-85 (affecting 8 out of the 110 floors intotal) of the South Tower with a speed of around 530 mph.

There were 2,750 casualties in total from the World Trade Center’s North and South Towers.

American Airlines Flight 77 was a domestic passenger flight set to fly from Washington Dulles International Airport in Virginia to Los Angeles. Unfortunately, this plane was also hijacked by 5 al-Qaeda terrorists. On board were 6 crew, 2 pilots, 4 flight attendants and 58 passengers. This plane crashed into the western face of the Pentagon, outside of Washington D.C. There were 184 casualties in total.

United Airlines Flight 93 was a domestic passenger flight that was on its way from New Jersey to San Francisco and was hijacked by 4 members of al-Qaeda. The target of the fourth plane is still unknown, but is believed that the plane was supposed to attack either the Capitol Building or the White House in Washington D.C. On board were 6 crew, 2 pilots, 4 flight attendants and 58 passengers. The reason for the plane not reaching their target destination was the passengers fighting back. The plane eventually crashed in Pennsylvania with 40 casualties.

7:59 AM: Flight 11 takes off from Boston Logan International Airport.

8:15 AM: Flight 175 takes off from Boston to Los Angeles, with eleven crew members, five hijackers, and 76 passengers.

8:19 AM: The first call comes from flight 11 personnel about the flight being hijacked, by Flight Attendant Betty Ann Ong.

8:20 AM: Flight 77 takes off from Washington Dulles International Airport to Los Angeles, with six crew members, 53 passengers, and five hijackers.

8:24 AM: Flight 11 Hijacker accidentally transmits a message to Air Traffic Control, alerting them of the attacks, by pressing the wrong button in the attempt to communicate with the passengers on the plane to warn them to stay away.

8:30 AM: The World Trade Center opens, a major hub for work, transportation, and business with around 17,400 people inside both buildings at the time.

8:37 AM: Boston Air Traffic Control alerts the US Military of Flight 11’s message about the hijacked plane.

8:42 AM: Flight 42 takes off from Newark International Airport, slightly delayed by 30 minutes, with four hijackers.

8:46 AM: North Tower Attack, Flight 11 crashing through the tower and killing an unknown amount of people on floors 93 to 99, along with the 76 passengers and 11 crew members.

8:46 AM: First Responders mobilize and evacuations are ordered for the North Tower.

9:03 AM: South Tower Attack, Flight 175 crashing through floors 77 to 85, killing an unknown number of people and the 51 passengers and 9 crew members.

9:36 AM: Vice President Dick Cheney is evacuated and ushered into a bunker.

9:37 AM: Attack at the Pentagon, Washington D.C. 125 people are killed, along with the 53 passengers and six crew members of Flight 77. One side of the building is severely damaged, with fires starting after the attack.

9:42 AM: The Federal Aviation Administration grounds all flights. All civilian planes in the air are ordered to land.

9:59 AM: South Tower collapses. As a result, 800 civilians and first responders are killed because of the South Tower attacks.

10:03 AM: Flight 93 crashes in a field in Shanksville, Pennsylvania, killing 33 passengers and seven crew members after they storm the cockpit in order to take control of the plane. The target of the plane is not known.

10:28 AM: Collapse of North Tower. More than 1,600 people are killed as a result of the attack on the North Tower.

12:16 PM: US Airspace closes, due to safety concerns and the knowledge of the attacks that were done by hijacked aircraft.

12:30 PM: A group of fourteen survivors is found in North Tower’s stairwell ruins by first responders.

8:30 PM: US President George W. Bush addresses the Nation from the White House.

The attacks of September 11 not only impacted the United States, but the entire world. Although the terrorist attacks only took place in the U.S., many people around the world were shocked and filled with empathy, sadness, and fear. It was a very tragic event for those who were witnessing it happen in person, and also for those who watched it all unfold on live television. The attacks were replayed and talked about far after September 11, leaving everyone with strong feelings of sorrow and anger. Many loved ones were lost, along with 415 first responders.

After the tragic events of September 11, there were a lot of long lasting after-effects. The terrorist group that committed the terror act is known as al-Qaeda, consisting of 400-600 members and at the time, was led by Osama Bin Laden. 9/11 was a huge success for al-Qaeda, when Americans were left with an overwhelming amount of emotional distress. The strong emotions of anger and fear led the United States into war with the middle east ordered by president George W. Bush.
Furthermore, security measures became much stricter for sporting venues, airports, and government buildings. Although, the most drastic changes were made in airports. Before the attacks, passengers had to walk through a simple metal detector and IDs were not required in order to go through airport security. After the attacks, airports began requiring IDs for passengers to even go through the screening process. Full-body scanners became the new norm in replacement of conventional X-ray machines. TSA agents were trained to recognize unusual behavior in passengers before entering a screening facility. 20 years later, these strict security measures are still in place.

9/11 altered many aspects in life in 2001, and has continued to alter lives in 2021. In 2011, president Barack Obama ordered the CIA & U.S. military to assassinate al-Qaeda leader Osama Bin Laden. Laden was killed in a night time raid in his compound in Pakistan. After 20 years of war with the middle east, president Joseph R. Biden pulled American troops out of Afghanistan.

The Taliban has now taken over Afghanistan, much quicker than when they last took over in the 1990s. This is due to American forces leaving the middle east with all military equipment, which is now in the Taliban’s hands. Afghanistan’s president, Ashraf Ghani, also fled the country. Although their current take-over is not as severe as it was when they took over in the 1990s, women are still being rejected from universities, they are not allowed to leave their homes without a male guardian, and there have been reports made about arranged marriages. Women are also required to wear burqas, covering any skin and even their faces. Many are desperate to flee Afghanistan as the Taliban takes over again.

Significant minority groups are less willing to board flights, attend large events, and travel overseas to the United States due to the rise in Americans associating Islam with violence since 9/11.
The McIntosh Trail took a poll on the @mcintosh.trail Instagram to see how students felt about pulling out of Afghanistan.

@ethanfranklin359 said, “IT was selfish and embarrassing for our country and leadership in the world.

@corynn_faith said, “We were there for 22 years and we were keeping the peace.”

Getting the rest of the Americans stranded in Afghanistan will prove to be a challenge. Antony Blinken is the Secretary of State for the United States government. “Without personnel on the ground, we can’t verify the accuracy of manifests, the identities of passengers, flight plans or aviation security protocols,” Blinken said. “So this is a challenge, but one we are determined to work through. We’re conducting a great deal of diplomacy on this as we speak.”

The events of 9/11 will never be forgotten and may the lives lost Rest In Peace.