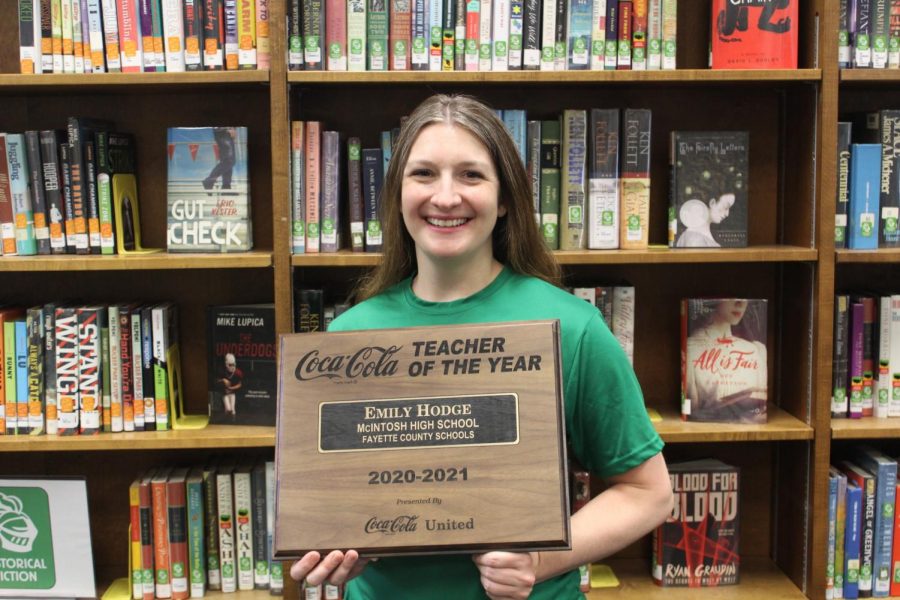 During the night of April 15, 2021, the Teacher of the Year for the Fayette County School System was announced at Starr’s Mill High School. Fayette County Board of Education Superintendent Jonathan Patterson revealed the decision during the ceremony, which was filmed and posted on the Board’s YouTube Channel.

“We are so excited to recognize the 2021 Fayette County Teacher of the Year-” the suspense is broken by Patterson struggling to open the envelope while making some humorous remarks, but eventually he does manage to get it opened.

“So, congratulations to the 2021 Teacher of the Year, Emily Hodge.”

The room bursts into an applause as McIntosh’s very own media center specialist walks on to the stage to give a speech.

“This is really quite a shock. Even being a finalist was shocking and being Teacher of the Year nominee was shocking and it’s just all been a lot so I am just so thankful” said Hodge in front of the social distant crowd. In her nearly eight minute acceptance speech, she reveals her humble nature as she recognizes the other finalists and the various faculty members at the Board and McIntosh High School.

Her acknowledgement of other faculty members was seen in an interview about her initial nomination conducted in November.

“The faculty and staff of McIntosh High School have always welcomed me and supported me, and it has been my joy and privilege to serve them in return. They have gone above and beyond for their students and now with this designation. I dedicate this nomination to all of them – the heroes of McIntosh High School.” Keeping to her promise in her speech, she dedicated her award to all of the teachers and administrators throughout the county.

Hodge also made history by being the first media specialist to win the award.

“I’m a media specialist receiving the Teacher of the Year award which is that much more of an honor. It’s just amazing… Just to be counted among the teachers means a lot to a media specialist. To be considered a fellow teacher and a collaborator, it’s just our ultimate goal and dream to be right there alongside you impacting the students” said Hodge in her speech.

Hodge also mentioned her mother as a main inspiration in her career.

“She encouraged me to go into education. She always taught me to work hard and be true to myself, and she’s the reason I’m where I am today.” said during a heartfelt moment as she acknowledged those that have an impact on her.

Hodge would share her further thoughts on the award in an email conversation after the award ceremony.