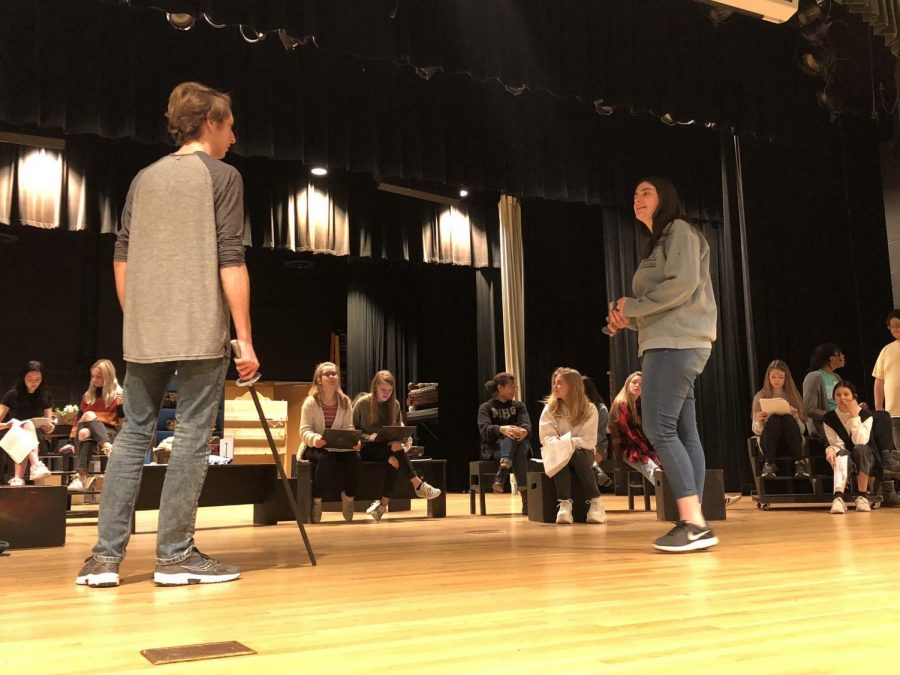 Seniors Sullivan Dawson and Eva Berger practice the final battle in Macbeth before their performance.

The Advanced Drama class here at McIntosh performed the traditional Shakespeare Tragedy, MacBeth on Feb. 27 and Feb.28. Included with their performance of Macbeth, the class will also performed two student written plays: “MacBeeth” and “McKids”.
For MacBeth, they are speaking in traditional Shakespearean language, with the original script, with a few cuts to shorten the performance time. They used their scripts onstage to keep track of scenes and lines.
“It was nice to have a script onstage because we didn’t have a lot of time to prepare for the play,” said senior Ann-Charlotte Langet. “It was a lot less stressful and I didn’t have to memorize all of my lines.”
Mr. Buswell, the drama director, also gave an introduction of all the characters in MacBeth to make sure people could understand the relationships and the plotlines, as Shakespearean language is traditionally tough to understand.
MacBeth is also believed to be a cursed play. There is a legend that if you say “MacBeth” in a theater, the stage or the next production to be held there could go terribly wrong.
Luckily, nothing went terribly wrong for the show.
“I don’t really believe in that sort of thing anyways,” Langet said. “I know that it is like cursed or something, but that is kinda a grey area in the play.”
The other two student written plays were written in the Dramatic Writing class here at McIntosh. The students were told to write an alternative to the classic tragedy Macbeth.
One of the co-writers of “MacBeeth”, Josh Keeton, is an actor in the advanced drama class that was performing. “Josh definitely helped us block the play out, because he was one of the original writers,” sophomore Meg Sheets said. “He also helped give us an idea of how he intended each scene to look like.”
Both “MacBeeth” and “MacKids” are extremely shortened versions of MacBeth. The Dramatic Writing class condensed the story of MacBeth with more of a comedic edge to it, and in modern language.
Advanced drama’s next performance won’t be until late April, where they will be performing a more modern day regular play, not Shakespeare.