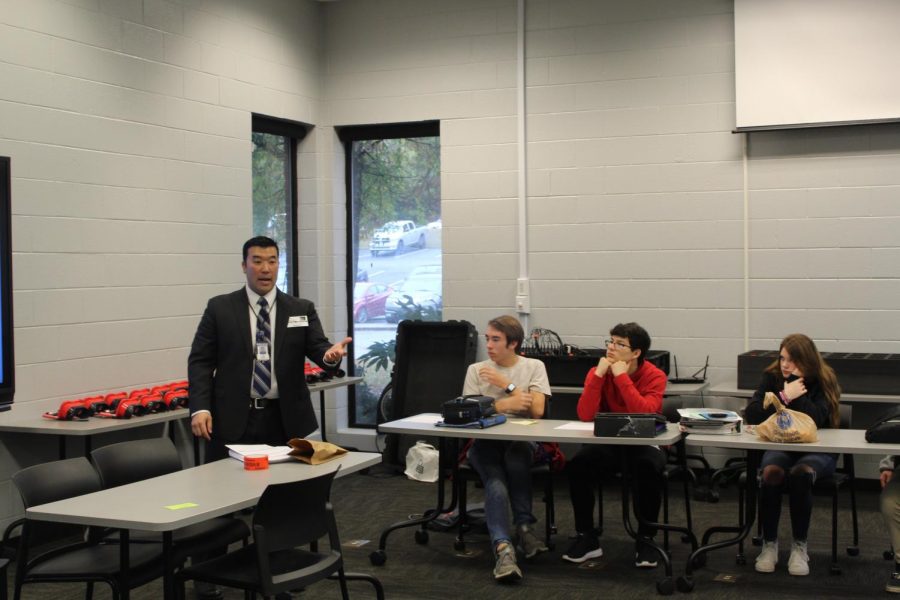 Peachtree City Police Department detectives Meier and Ishihara visited McIntosh High School as guest speakers for the new Individual and Law Class on Nov. 13. They spent the first hour of the day discussing with students their processes in documenting with chains of command, fingerprinting, and testifying in courts.

Despite almost having a full semester of this law class, the students and teacher alike used this opportunity to remember the expansive nature of careers and fields involving law.

“It developed my understanding of the law,” commented senior Katie Phillips. “I forget that job happens here in Peachtree City and not just on television shows or in big cities.”

Junior Vanessa Arias similarly articulated what she learned, saying “I found the presentation interesting and got a better description of how that job is.”

Senior Rebecca Zack enjoyed being able to “hear their insights on what [the detectives] found was important in their job.” However, Zack also admits that despite her interest, she was quick to add that the presentation was not a motivator to possibly pursue a career with law enforcement.

Individual and Law teacher Jennifer Nirenberg admits her excitement to “show [my students] another side of the law that you otherwise wouldn’t be exposed to.” She says that the detectives demonstrate “where the rubber meets the road in law” and found it noteworthy that “you could see how carefully they had to document everything […] and they seem to live in fear of carrying evidence around.”

However, there were also some hopes that weren’t entirely fulfilled with the presentation. Junior Zoie South wished that the detectives had come slightly more “prepared” while Nirenberg said “I wish they had told a little bit more about the cooler stuff they do.”

However, all are in agreement that this presentation will not be the end of the line for Individual and the Law guest speakers, or even the Police Department as guest speakers.

Nirenberg hopes to invite the detectives back “to do a bit more of a case study [or] on-the-ground work.”

Though admittedly unrealistic, Phillips feels as though, with the increasing level of interest coming from guest speakers, she would “hope to see President Trump or ambassador Marie Yavonovich” come to McIntosh.