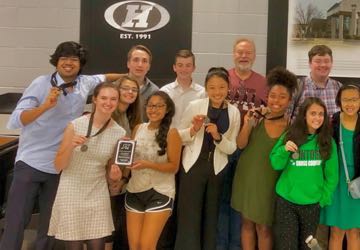 The McIntosh debate team, led by British literature teacher Ward Abel, has had a successful start to their season. Since the first meeting of the team in late Aug., they have gone to only one tournament in Houston County, GA. However, they have high hopes for the upcoming season.

Coach Abel has said that the team has “more speech-based talent this season, as in previous years where we’ve had better researchers.” Nonetheless, the entire team is ready to compete in another tournament in late Oct.

According to team captain Danushe Avaa, the team has “more than thirty students signed up for a bunch of different events.”

In addition, the upcoming tournament, set to take place on Sat. Oct. 26,  has something special about it. As it happens the week of Halloween, each of the McIntosh debaters is allowed to divert from the traditional formal attire, and wear their planned Halloween costume. “Last year we had some really fun, creative costumes,” said Coach Abel.

If you are interested in joining the team, “Simply come down to room 131, Mr. Abel’s room. You’ll make some of the best, long-lasting friends you can ever have”