Information Inundation: How McIntosh Students Are Learning About the 2020 Election 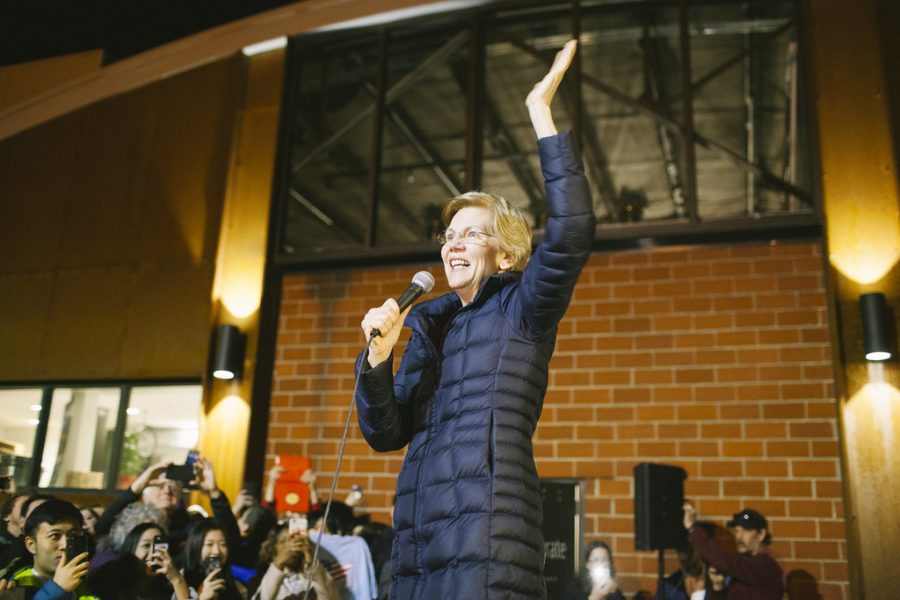 Elizabeth Warren, one of the Democratic Party's lead candidates, campaigns to students.

In an increasingly digital age, information about the 2020 United States presidential election permeates every moment of a potential voter’s day. From phone alerts to news broadcasts to social media advertisements, the updates seem endless.

For McIntosh’s senior and junior students, many of whom will be voting next fall, the abundance of information can be overwhelming. However, the variety of news formats also provides an opportunity: potential voters can choose the platform that functions best for them. McIntosh students embrace this freedom and utilize a variety of methods to gain insight into the upcoming election.

Some politically-oriented students have been paying close attention to TV programs that broadcast updates for the 2020 election. Channels like Fox, NBC, and CNN have nearly perpetual political reporting that can provide an excellent framework for understanding all developments. So far, some of the largest televised political events have been the Democratic debates.

Senior Katie Phillips believes that “watching the debates is important because it allows you to hear the individual opinions and policies of all the candidates” as well as “see the manner in which they conduct themselves,” two key indicators of their potential success.

Aside from the debates, junior Carl Elmore often tunes in to the political commentary when his parents watch news segments. However, the internet provides an even more accessible resource that is becoming increasingly popular for political news.

More and more, students seek news from a variety of both official and unofficial online sources. Senior Matthew Shatto reads think tanks and opinion websites such as Brookings Institution, The Heritage Foundation, and The Daily Wire, while Katie Phillips opts to read Politico.

Relying on news alerts on cell phones, senior Abiola Batiste claims that he “check[s] the news […] every hour about candidates.”

Although not a historically reliable news source, social media sites have recently taken the center stage in politics because of their ability to quickly distribute concise information to millions. “Twitter […] has been a good place for me to find election information recently” said Liam Fennell, senior. “Keeping up with candidates, news sources, and political social media accounts can prove very helpful for stay[ing] up to date in this day and age.”

Some students, however, prefer to remain as detached as possible from the political world. Senior Noah Mewborn believes that politics are “emotionally draining” and that social media appeals to “what people want to hear” rather than providing reliable information.

Similarly, senior Thomas Jackson thinks that the political world is filled with “a lot of drama.” Both Mewborn and Jackson plan to become more informed as the election nears, but prefer to keep their distance for now.

Senior Connor McCrudden, however, does not plan to keep up with the election at all. A firm believer that none of the candidates represent his beliefs and that his vote is irrelevant, McCrudden plans to “vote for the stupid candidate.”

No matter how they obtain their information about the election, most McIntosh voters seek unbiased news and a candidate that represents their views. Many students spoke eagerly and passionately about the importance of voting. Carl Elmore expressed frustration with those who choose not to exercise their right: “With the political climate nowadays, everybody’s always saying ‘these people aren’t doing anything’ or ‘we don’t like these people’ and then they don’t go vote.”

According to senior Matthew Shatto, “it’s absolutely important for people to educate themselves this early” in local, state, and federal elections, because “a lot of people I know at McIntosh don’t even know who the mayor is.”

As stated by senior Rachel Cox, voting is a patriotic duty: “The least you can do is vote on who is going to lead that country that’s given you so much already.”