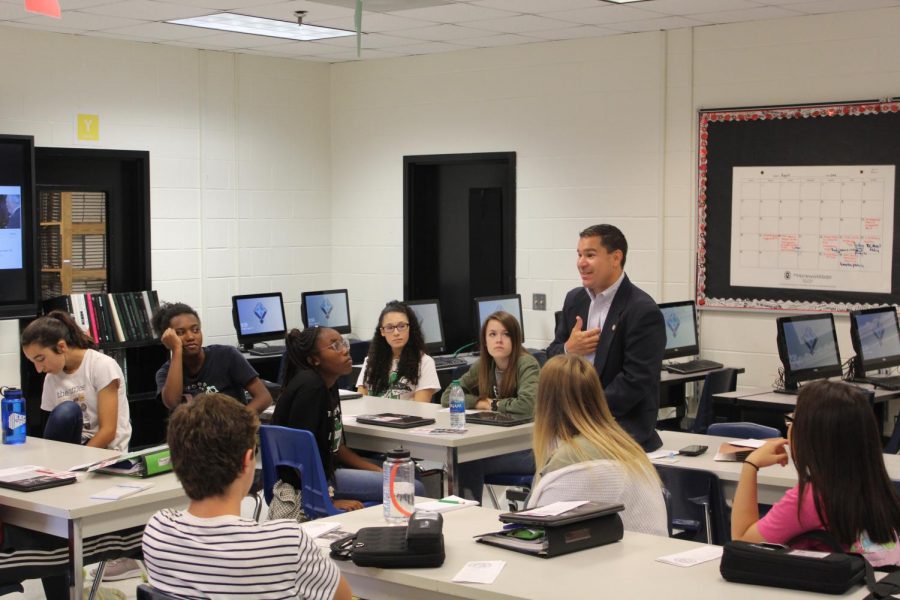 On Aug. 23 the Trail staff invited guest speaker, Judge Jason B. Thompson to speak on multiple topics of law, freedom of speech and defamation.

Thompson attended Maryville College and Cumberland School of Law. He presides over civil and criminal matters in the Fayette County Magistrate Court. He was appointed by Governor Nathan Deal in Apr. 2013 and was elected to serve as Fayette County State Court Judge in May 2014.

Thompson began by explaining the difference between the juvenile court and the state court. He also explained that when he was apart of the magistrate court, he was on call at “all hours of the day.”

He used this to explain that what they say in the courtroom is crucial. “Everything you say in court is written down and recorded,” said Thompson. “Specific language use is important.”

Thompson also went over multiple court cases that have affected journalism in some way. Beginning with the Dekalb County student who wore a “fire the principal” button to school and won the court case against the school system through his freedom of speech. He explained that since it is a public school, students have the right to criticize their administration because of the first amendment.

In further detail, he went on to describe that if it crosses the line to put someone at harm, it is not acceptable and is not guaranteed by one’s freedom of speech.

When explaining defamation, he used the example of the Olympic bomber in 1996. Richard Jewell, who was wrongfully accused of being the Olympic bomber, sued The Atlanta Journal-Constitution for libel. Using the case, Thompson explained to the staff that defamation has to be more than just being embarrassed in a public scene.

Lastly, when asked on what he thinks will have to happen to change the senators judgement on cyberbullying and freedom of speech, Thompson said he believes “the next generation of text savvy senators will have to hop in to change digital media.”