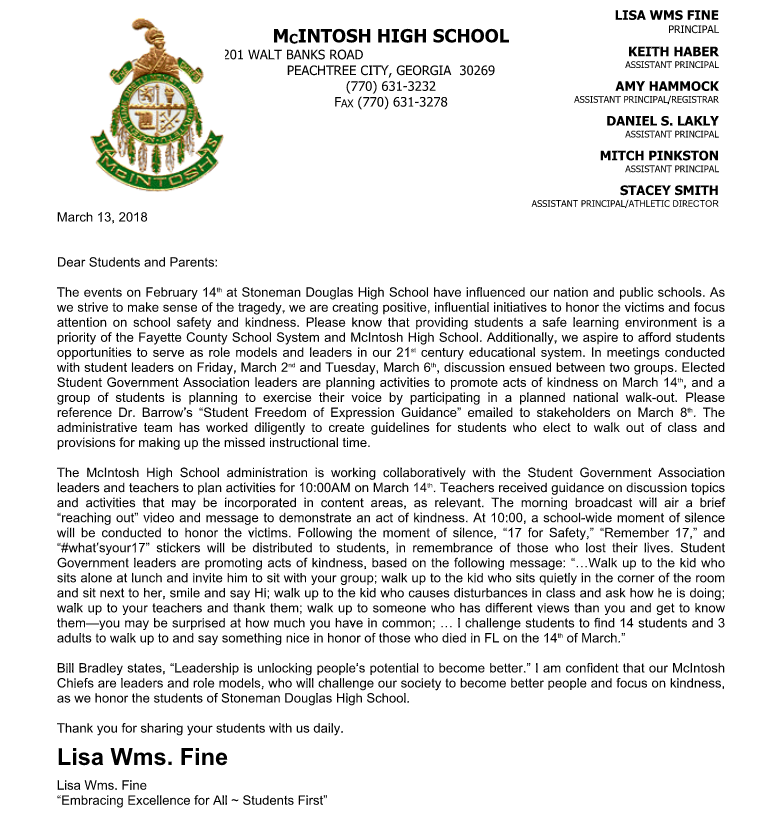 In response to the school shooting in Broward County, Fla. last month, Women’s March Youth Empower, an activist group, has organized a nationwide student walkout. This walkout is set to take place on March 14th at 10 am, and will last for 17 minutes. Organizers and demonstrators hope to change what they perceive as congressional inaction on the topic of gun control.

Today, Mrs. Fine sent a letter in response to the proposed walkout to parents, students, and faculty. In it, she described an alternative to the walkout scheduled to take place during tomorrow’s second period class. According to her letter, the MHS administration has organized a video, a moment of silence, and sticker distribution that will take place at 10 am. She also suggested a movement to “Walk Up” rather than “Walk Out.”

Today’s letter follows the March 8th letter from Dr. Joseph Barrow, the Superintendent of the Fayette County Board of Education, regarding the growing support behind walkouts. In his statement, he encouraged free expression; however, he affirmed that the school day can not be disrupted without consequence. This disruption of the school day conflicts with the FCBoE focus on learning and safety. As such, the code of conduct is still in place, and students who walk out of class on March 14th could face disciplinary action.

Nevertheless, FCBoE supports peaceful assemblies as long as they do not disrupt the school day, which alludes to the possibility of an alternative. An assembly before or after school would be allowed under the school’s rules, yet this change in time disrupts the unity with other walkouts happening at 10 am.

It remains unclear whether Mrs. Fine and Dr. Barrow’s statements will be enough to deter the walkout planned for tomorrow.

Some students think that more should be done to promote gun control and believe that the walkout serves a purpose beyond simply remembering the lives that were lost and promoting kindness. Senior Lia Hill, who appreciated Mrs. Fine’s proposal, remained skeptical of its effectiveness in replacing the scheduled walkout.

Hill said, “There should be regulations to gun control. Restrictions seem necessary to save lives, and that should be a priority to the public education system. I am glad that the school supports us in trying to raise awareness, but the walkout has an additional meaning that can not be replicated in Mrs Fine’s proposal.”

Meanwhile, other students think that the video and moment of silence suffice.

Senior and President of Young Republicans club Arik Li said, “I think that the purpose of the walkout is fulfilled with the moment of silence, and I’m grateful that it doesn’t disrupt class. The thought is fulfilled in the video.”

A third group lies somewhere between these two opinions and remains ambivalent to the planned walkout.

Junior Mark Ni said,“I don’t feel strongly enough about the issue to participate in the walk out.”