A5 Volleyball Tournaments Cancelled Due to COVID-19: Player Shares her Thoughts 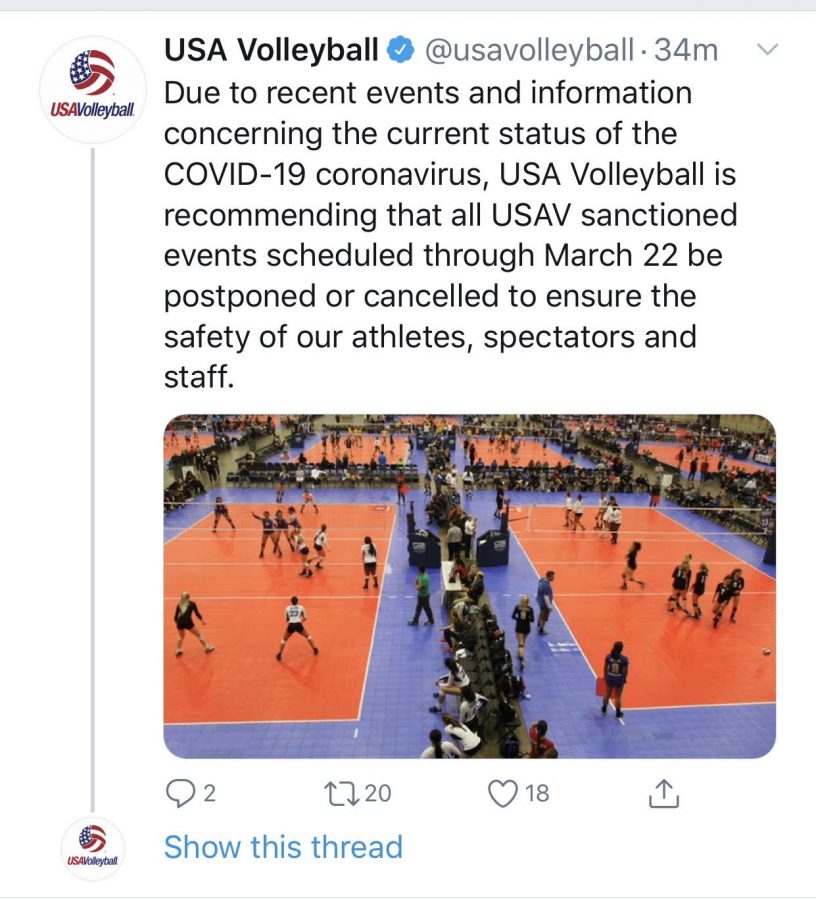 Tweet by USA Volleyball stating that all tournaments with a large amount of people participating should be cancelled due to the outbreak of COVID-19. The tweet states that tournaments will try to be pushed back to Mar. 22nd, however the COVID-19 will most likely still be at large. If USAV can not find a later date to push the tournaments to, they will be cancelled permanently.

Due to the COVID-19 outbreak, there has been many cancellations for sports events and the gathering of sports teams in general. One sport organization in particular that has been affected by the COVID-19 is the A5 volleyball organization. The A5 volleyball organization has various tournaments for teams across the southeast to compete in. The Coronavirus has caused fear and now the tournaments have been cancelled in order to ensure safety of everyone participating in the event. However, the cancellation of the tournaments has been discouraging for the players on the team.
Sophomore Alexa Markley, has been playing volleyball for five years. She began playing in the seventh grade. She had put in a great amount of effort to make the team. “The process trying out for an A5 team is nerve-wracking at first because there are so many talented athletes,” said Markley. “Once you make the team, it is an amazing experience.”
Markley was sad to say the least about the cancellation of the tournament. “I felt disappointed because as a team, we have put in so many hours practicing for these tournaments.”
USA Volleyball had suggested that tournaments with 100s of teams entered be postponed until Mar. 22nd. However, it is not guaranteed that all of the events will be rescheduled to this date. “Right now, three of our tournaments are in the process of being rescheduled, but if they can’t find a later date then they will be cancelled,” said Markley.
One of the tournaments that Markley was entered in was extremely important for qualifying for nationals. “MEQ is a huge qualifier with 100s of teams signed up in Minneapolis, MN,” said Markley. “Another tournament in Colorado, that was scheduled for another team in A5, is cancelled as well. If you place at the top you have a chance to get a bid to nationals, also meaning there are a ton of people there – parents, teams trying for a bid, college coaches, etc.”
The cancelation of the tournaments put a damper on not only Markley’s goals for the season, but the rest of her team’s goals as well. However, the setbacks do not phase them. “Our overall goal for this season is to win nationals in July, which is still obtainable even with the setbacks. We just might have to work hard in practice and realize that we might not have as many chances to compete against other teams before nationals.”