Out With the Old, In With the Tune 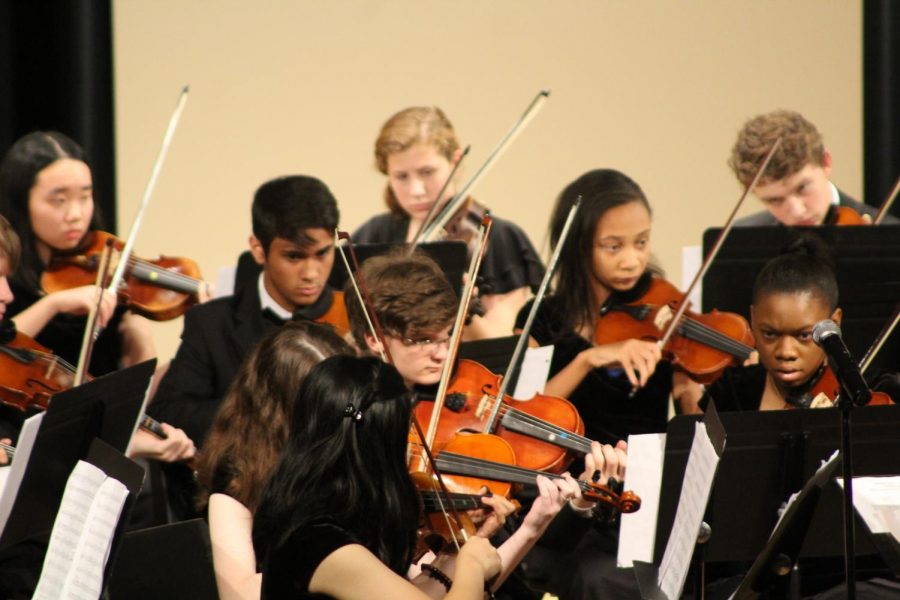 Rae Litowich began playing piano at age seven and violin in fourth grade. Then, in an unusual twist of events, she started learning percussion in high school.

“My high school did not have an orchestra,” said Litowich. “When my mom came to check out the school when we were moving down here, she asked the counselor, ‘Do you have an orchestra?’ He said, ‘Oh, we have a wonderful orchestra, but they’re at lunch so you can’t hear them right now.’ Turns out the guidance counselor didn’t know there was a difference between orchestra and band. So I showed up for orchestra on the first day of school with my violin to find out there was no class for that. So I started playing percussion.”

Litowich went on to teach middle and high school orchestra for a total of 14 years. Now, she’s the new orchestra teacher of McIntosh High School.

“I was the LGPE [Large Group Performance Evaluation] judge in Fayette about four years ago and saw [the McIntosh orchestra] perform and decided right then and there that I wanted to teach these kids,” said Litowich. “I have just been waiting for the opportunity for this job to be open to try to be here.”

Litowich has big plans to improve the orchestra program.

“I think we’re just hoping for some more involvement at the moment,” said Litowich. “Bringing in some parent involvement, creating extra activities for the kids beyond just the concert. I’m just looking to keep us all involved a little bit more.” Additionally, “I one day hope to get an orchestra room with windows. It would be nice to know what the weather was like outside. See a little bit of sunshine.”

Litowich also spoke about the impact of orchestra on a student.

“One of the biggest things that McIntosh kids are looking at is where are they going to college,” said Litowich. “One of the things the colleges are starting to reveal about their admissions process is that they’re looking for well-rounded students. Not just the highest score on a test or the most APs, but whether or not you’re capable of functioning in a group setting and working on a team, and the quality of your mental health. Those are all things we teach you every day on top of your instrument. We make you the better candidate. […] The ability to let go of your stress is something that’s really important to your every day, and I think we’re that moment in the day that does that for you.”

Brianna Perez, a junior, is beginning her sixth year of orchestra as a viola player. Her favorite part of orchestra, aside from actually playing the music is learning technique and music theory. Although she finds fine-tuning techniques somewhat tedious, she acknowledges that they are valuable and useful.

“We spend a lot of time on shifting and scales,” said Perez. “We have an advanced technique book […] and we go through them over and over again until we’re all perfectly in tune and we can all shift well, and then we go from that straight into scales. Half of our class is usually technique based.”

Perez acknowledges that Litowich’s teaching style differs greatly from the former orchestra teacher, James Hagberg. This year, she thinks there is a greater focus on music theory.

“Ms. Litowich wants us to play correctly with good technique that then makes our music sound good, which I think I prefer more because I’m able to learn more skills that I’m able to use for a wide variety of music, not just using skills that fit one piece,” said Perez.

When asked about the impact of the arts on a high school student, Perez said, “I think orchestra has helped me to express myself in a musical way. There’s a certain critical thinking you need for music, no matter what ensemble you’re in. For example, if we have a piece and there’s a hard part in it, like a difficult run, you have to find a way to be able to play it. Orchestra also gives you a wider sense of culture. You can play pieces from the Baroque era and then compare them to pop culture. You can learn about why music is the way it is.”

The Advanced Orchestra is currently working on a piece entitled “Psycho.” Perez is proud of their progress so far.

“[Ms. Litowich] is definitely going to push us past our limits to be better than we used to be,” said Perez. “I definitely think these next two years for me will be my best years in orchestra.”

Perez hopes people will come out and support the orchestra at their concert on October 10th. “It’s nice to be rewarded for your efforts by having an audience.”

“It’s a very different experience for me,” said Tun. “The classical method book has different postures and different ways of picking the strings.”

Tun feels that the class is a valuable addition to McIntosh.

“I know that Starr’s Mill has a whole jazz guitar course,” said Tun. “I feel like McIntosh could have more musical courses besides band and orchestra. I can see that they’re focusing on adding that stuff, and I think it’s good. There’s a science part of it. Left brain, right brain. Arts are very valuable in today’s society. We can’t just have a whole rational world, because we live in an irrational world. Art is naturally irrational.”