Hello from the across the Pacific: Brooke Winters studies in Japan 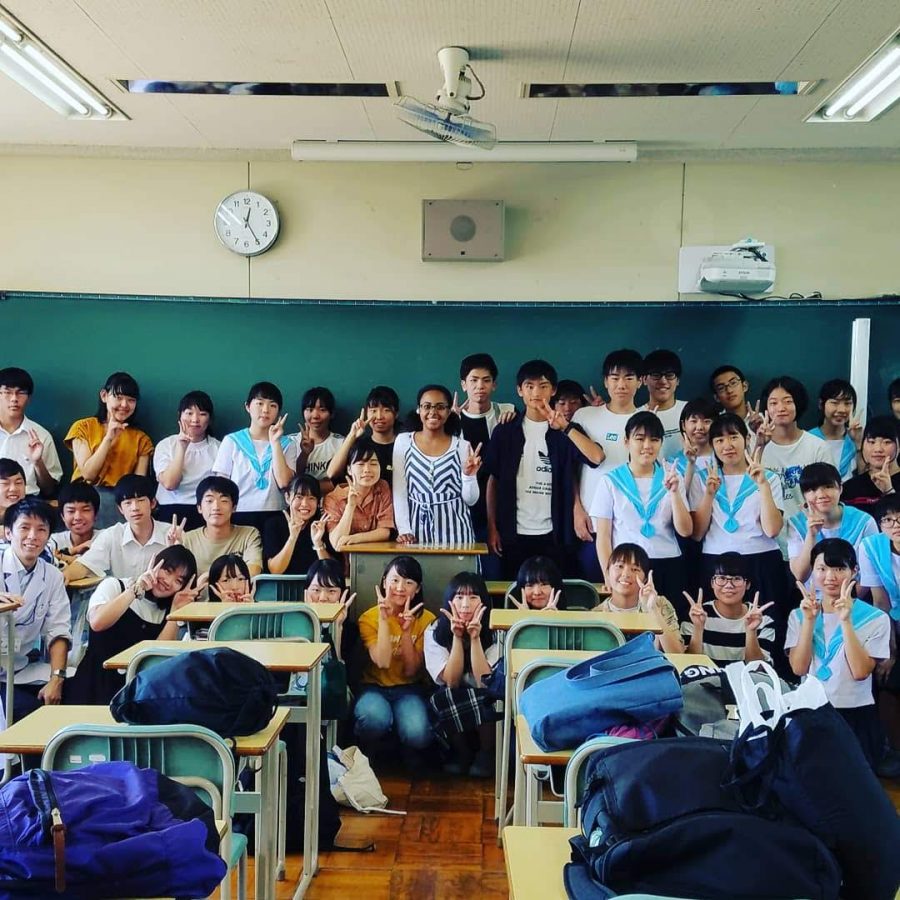 Junior Brooke Winters (center) stands with her Japanese classmates. "Most of the other students were Japanese, although there were some other foreign exchange students at m school," said Winters. Winters attended a Japanese school for six weeks as a part of a foreign exchange program over the summer.

Junior Brooke Winters went to Japan over the summer as a part of a six-week foreign exchange program called the Youth For Understanding (YFU).

YFU is a volunteer-based organization that connects students with host families in different countries. According to the YFU website, the organization has member organizations in 50 different countries, and its mission is to “[advance] intercultural understanding, life-long learning, global competencies, mutual respect, and social responsibility through transformational educational exchange.”

“The Japan trip was a foreign cultural exchange [program] for six weeks during the summertime,” said Winters. “I read a book about things that teenagers should do before they graduate high school. It mentioned foreign exchange programs, specifically the YFU organization.”

The YFU offers over 200 country-specific programs for students. Students can apply for either a full or partial scholarship.

“I had to fill out an application with my basic information and submit a bunch of forms,” said Winters. “I also had to submit responses to several essays. One of the essays was concerned with how a potential foreign exchange student would cope with homesickness. Another was something like, ‘What qualities should a foreign exchange student have when going abroad?’”

The program placed Winters in Okinawa. While there, Winters attended a Japanese high school and took classes with other Japanese students there.

While in Japan, Winters was faced with a language barrier.

“Most [of the classes] were in Japanese–only the English classes were in English,” said Winters. “It was difficult for me to understand what was going on in most of them. Even in math, there was lots of kanji that I could not understand.”

Despite the language barrier, Winters believes that she learned from her trip, not only in her classes, but also about the language and the culture.

“I kinda just had to figure it out, but I learned a lot,” said Winters. “It was also really funny because during English, everyone would be asking me questions about grammar and punctuation.

While in Japan, Winters stayed with a host family.

“I lived with a host family who covered my food and board,” said Winters. “One of my favorite memories was going out to eat sushi with my host family after a day of shopping together. I really loved spending time with them.”

“I visited a lot of local landmarks such as Osaka Castle and Ryoan-ji,” said Winters.

Winters would recommend a foreign exchange trip to other students as well.

“The application might seem like a lot of work, but foreign exchange is a rewarding and enriching experience that is totally worth the work,” said Winters.