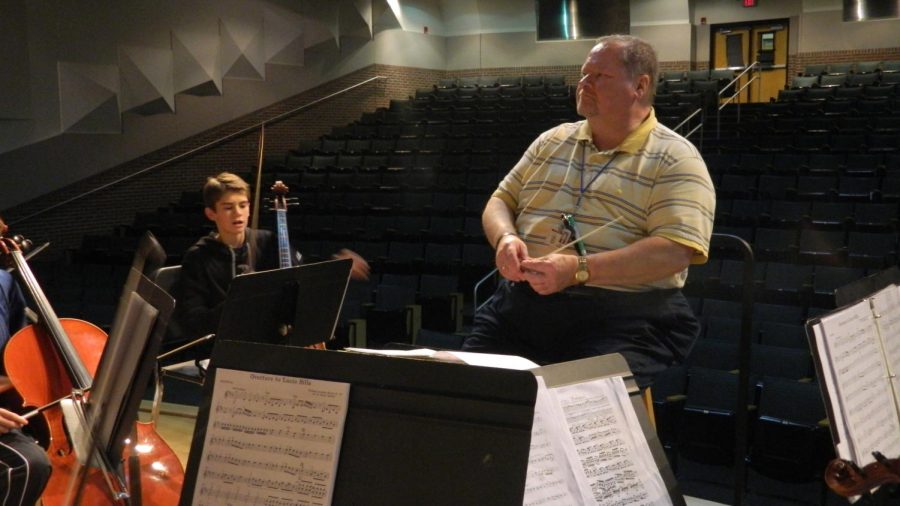 James Hagberg has been an orchestra teacher for middle and high school students for fifteen years now in Fayette County. Mr. Hagberg is planning to retire at the end of the 2018-2019 school year. His plan marks the end of more than a decades worth of teaching in a classroom.

Hagberg was introduced to the violin by his sister who is five years older than him. “I thought that was really cool that she could play the violin,” said Hagberg. “So when I had the opportunity, I also wanted to play the violin.” His sister decided to stop playing after high school, but he decided to keep playing because of his interest in music.

Hagberg knew from an early age that he wanted to pursue a career in music. “I knew from middle school that I wanted to be a musician and that I specifically wanted to learn to conduct,” said Hagberg.

His teacher suggested to him that if he wanted to conduct an orchestra, he would have to master one of the instruments being played. “So of course, I choose the violin,” Hagberg said.

Hagberg earned his bachelor of music in violin performance. Because of his desire to conduct, he attended Rice University in Houston, Texas to earn his Master’s degree in conducting.

He left Texas because his wife’s job with Delta Airlines closed down. They had to move to another Delta city. Before coming to Georgia, his family moved to Cincinnati. There he played in five different symphony orchestras. “I played as concertmaster in another symphony orchestra in Cincinnati, so I got to play a great deal while I was there,” Hagberg said. The Cincinnati Delta closed down as well and the only other place where there was a job opening was Atlanta.

Hagberg was not planning on becoming a full-time orchestra teacher when he first came. He started out as a substitute teacher. He received a phone call from Sandy Creek one day because the orchestra teacher that they had hired quit after the second week of school. “I just so happened to have completed my substitute training,” said Hagberg. “When I got to school that Monday, they said they were in a fix and asked me to teach all year.” He shifted his plans and became a certified teacher. He’s been teaching in Fayette County ever since then.

After his retirement, Hagberg will not just be sitting at home relaxing. He plans to continue conducting the high school orchestra for the Fayette Philharmonic Youth Orchestra. He also plans to conduct at his church on special occasions. Mr. Hagberg has contributed tremendously to the success of the orchestra here at McIntosh.