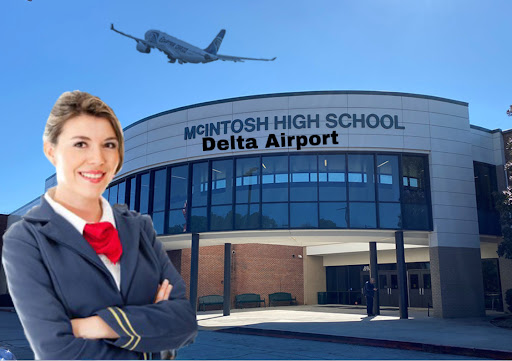 On Oct. 15, 2021, the son of Delta’s CEO Willy Winston offered the Fayette County Board of Education $1 million to build a private airport on the McIntosh baseball field. The construction started on Nov. 5, 2021, and finished on Jan. 2, 2022. The new McIntosh private airport will be available to students on Apr. 2, 2022, and will operate using two full-sized Boeing 737 planes.
Willy Winston wanted his own private airport in the Peachtree City area because he wanted to be close to his sick and dying grandmother. He said in an interview with the Trail that he feels like “the commute from Atlanta airport to Peachtree City is too long, I’m a busy person who moves a lot but I also want to be close to my granny.” His grandmother is suffering from stage four lung cancer and is currently on life support. Because of her condition, Winston wanted to “get home quick,” just in case of an emergency.
Winston was looking for a plot of land to build his airport, but the deforestation laws in Peachtree City prevented him from just building an airport in the middle of the woods. He then tried to meet with the local country club about using their golf courses as an airport. The country club agreed to start construction in August but when the airport construction started they uncovered over five dead bodies buried on the golf courses. Apparently, the bodies were those of the Miller family who mysteriously went missing in 2007. The owner of the country club Jean Applebottom commented on the bodies saying “I didn’t know those bodies were on my land.” Willy Winston decided to stop the construction just two weeks after it started in fear of getting haunted by the bodies on the golf courses.
Without a plot of land to build his airport, he decided to go on a helicopter ride around north Peachtree City and saw that McIntosh had a massive field that was not in use. He contacted the Fayette County Board of Education (FCBOE) about buying the McIntosh Baseball and football fields for his airport. McIntosh is currently indebted to the Italian Mafia after borrowing money from them to build a 3rd floor. Sadly, a teacher at McIntosh, Ben Betty stole the money for the 3rd floor and ran away with it on Dec. 21, 2020. Without enough money, FCBOE decided to take on Mr. Winston’s proposal of giving them $1 million to build an Airport behind the school.

The construction started on Nov. 5, 2021, and finished on Jan. 2, 2022. He will have the Baseball and Football field paved so that they could be a runway for his private jet. Willy Winston started making flights to and from McIntosh as soon as the airport was built. He would drive straight to Grandma after his flights. Sadly his grandmother passed away on Feb. 6, 2022. She passed away after a bus hit her window and destroyed her life support machine. Distraught by the news, Willy Winston temporarily shut down the airport construction to mourn his grandmother’s passing. He said that he was “in the worst condition I’ve ever been in my whole life.”
Eventually, he decided to reopen the airport to honor his grandmother. Instead of just a private airport for Willy Winston, he decided that McIntosh students could also use the airport. He ordered two large Boeing 737 planes for the school. On Apr. 2 the airport will be reopened as a free airport to the students and staff. He said “I wanted to honor my grandmother by providing for the community that helped me in my darkest times.”
Now Delta is giving free flights to McIntosh students to all major airports in the USA. They are also hiring new staff and interviews will start on Apr. 10.
This story is a part of The Trial’s April Fool’s Day satirical issue. This story is fake.