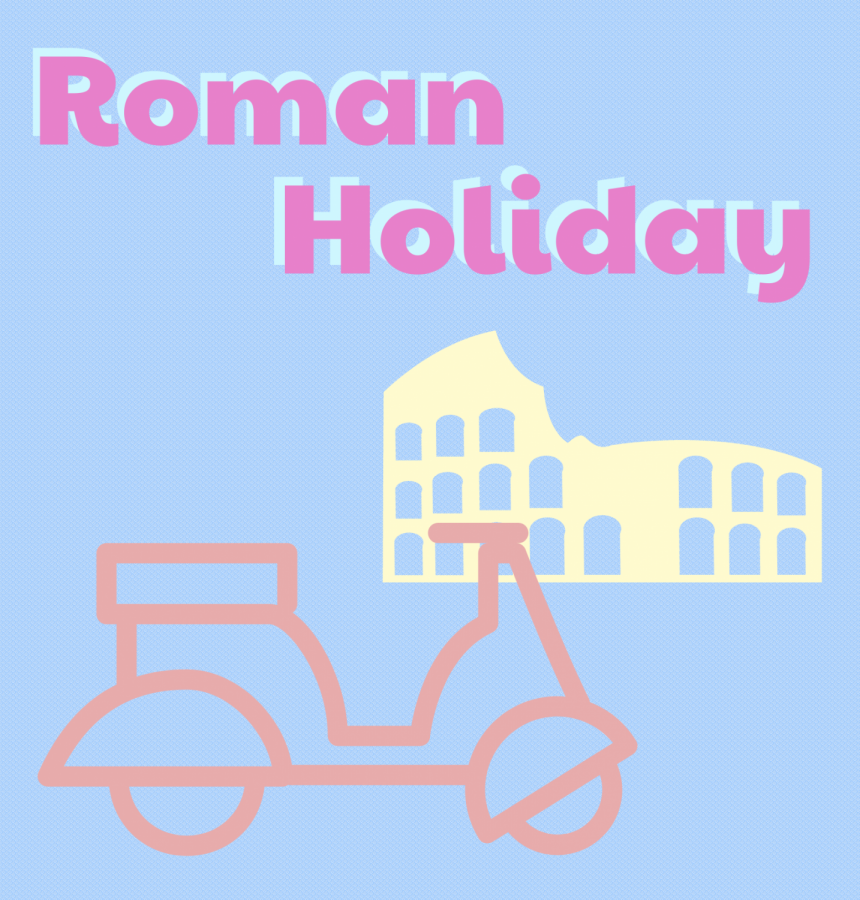 Interpretation of Roman Holiday as a poster

The glamour of classic Hollywood is presented in a variety of films from that era of 20th century film history. There’s a whimsical feeling in seeing the chiseled men and elegant women on the silver screen acting in a way that mixes traditional stage acting with the at-the-time frontier of film acting. A landmark film from this Hollywood era is the 1953 film “Roman Holiday.”

“Roman Holiday” was the first major role in an American film for British actress Audrey Hepburn. For her role in the film, she would win an Academy Award for Best Actress. The story behind the writing of the film involves screenplay writer Dalton Trumbo, who couldn’t be credited during the initial release of the film due to him being blacklisted by Hollywood for his alleged communist ties. Communism was seen as a major issue in the United States during the 1950s, plaguing aspects of American life, including its entertainment industry. Alleged communists were ousted by other Americans in a mass hysteria. Despite these setbacks, Trumbo was still able to write the film for director William Wyler through another screenplay writer Ian McLellan Hunter, who took the credit despite also being blacklisted later on.

The film has various enjoyable elements. Gregory Peck (who also appears in the film) and Hepburn act excellently as their characters, being inoffensive and likeable people. Hepburn portrays a princess named Princess Ann who is fed up with her life as royalty and enjoys the more mundane aspects of normal life, viewing it as a luxury. Peck portrays a stoic journalist named Joe Bradley whose intentions change in terms of his treatment of the princess from using her for just another story to genuinely caring about her. In addition to Peck and Hepburn, Eddie Albert acts as the memorable third wheel to the duo. His role as the comedic relief photographer flows well with the budding romance between the journalist and princess. Though these characters are not groundbreaking on paper, the actors did an excellent job portraying the characters, making them memorable to the audience.

In writing the film, Dalton Trumbo rarely wastes time on side plots and mostly focuses on the duo as they adventure around Rome. Even from a 21st century viewpoint, the dialogue between characters flows easily, showing Trumbo’s true writing skills . Instead of writing an ending that pleases the audience, he writes one that is surprisingly honest and more impactful than traditional endings to love stories with a “happy ever after” conclusion.

A surprising element of the film was the comedic bits that appeared throughout the film. Each joke, though at times dated, found itself at the right time, and a beautiful result of an intelligent combination between award winning acting and memorable writing. Some of the jokes were creative, including a recurring one between Peck and Albert’s character about keeping secrets.

Even though it’s the setting of the movie, Rome almost acts as another character in the film. The film allows for the audience to see what 1950s post-war Rome looks like. Between the bustling markets, small classic Italian cars and Vespa scooters, the city stands out in the story, adding on to the adventurous side of the romantic story.

Overall, the film was an easy watch. With the likeable characters and comedic elements, the film is enjoyable for all audiences. If you are looking for a romantic comedy film from classic Hollywood, this film should definitely be added to your list.