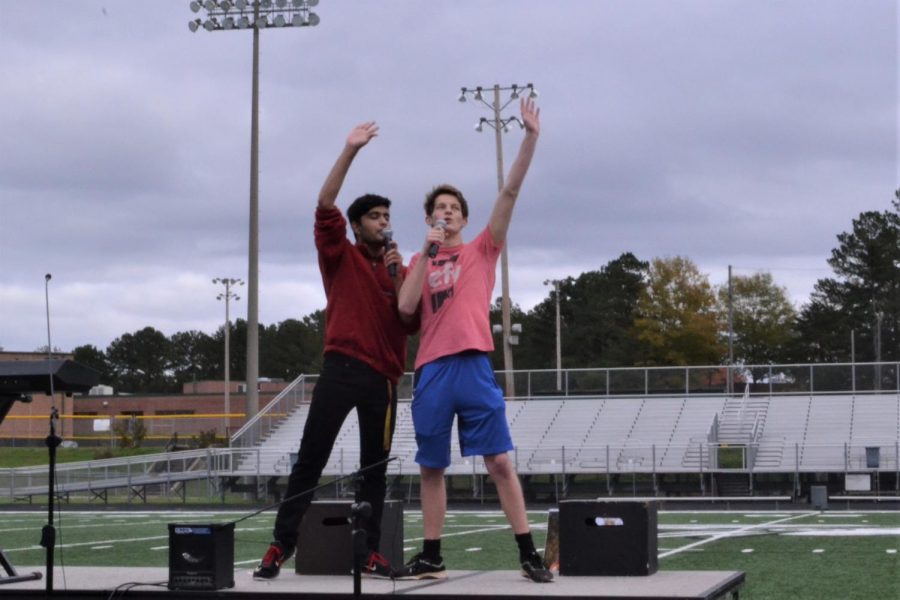 The annual McIntosh talent show took place on Saturday, Nov. 7 in the McIntosh football stadium. Because of the COVID-19 pandemic, the talent show was not able to be held in the auditorium like usual because of social distancing guidelines, and so the show was held on the football stadium.
The show consisted of 15 different acts split into two groups. There was a short intermission between both groups, so people could vote for their favorite act or get food from concessions. Everything about the show was normal except for the accommodations that had to be made in order to ensure that everyone who attended was safe.
“The biggest difference was the performance location and the acts,” said chorus director Hannah Beth Lee. “I think the most important thing about the show this year was it gave our students a taste of normal and the opportunity to make a high school memory. So many things have been canceled or postponed for everyone this year. It was a great opportunity to get creative and still give the students something they love: the opportunity to perform or to watch their friends perform.”
The winners were junior Kennedy Welker, senior Allie Cincera, junior Natalie Clarke, junior Deeya Khanwani and sophomore Emily White.

Natalie commented on how she and Khanwani prepared for the talent show.

“Deeya and I met in my basement about twice to pull together our song,” said Natalie. “We actually changed our song four days before the talent show; we ran through it a few times and found harmonies that sounded best.”
In addition to these performances, there were other singing acts.

Senior Kaylin Clarke performed a cultural Maori song, Pokarekare Ana and a Poi dance, which is a Maori dance with a ball tied to the end of a cord. She went on stage with her grandfather, who played the guitar and sang along with her while she danced and sang. The two closed their performance with a traditional Hongi, which is a Maori greeting where two people press their noses together.
“I wanted to show my appreciation for Maori culture and learn to be closer to our traditions,” said Kaylin. “The song I performed has a story with it. It is the story of Hinemoa swimming across the stormy waters of Lake Rotorua to reach her forbidden lover Tutanekai.”

Senior Karsyn Jewell sang “Still Rolling Stones” by Lauren Daigle. She wanted to glorify God through her performance and show how God has renewed her.
“I was going to sing ‘Two Black Cadillacs’ by Carrie Underwood because I knew I could hit the notes well and sound the best, but at my discipleship group I was convicted,” said Jewell. “Everything I have, including my voice, is because of God. He deserves everything I have, so why would I miss an opportunity to serve Him through the talent show?”

Isabella Hickey was the only freshman on the show. She sang “Second Hand White Baby Grand.” Through her performance, she wanted to show that she was a McIntosh student and do something with the upperclassmen.
“This performance was very special to me because I had just experienced a loss and the song that I had already picked actually included some sorrow and hope in it,” said Hickey. “So I feel that it was me recovering from what had happened, and go back to what I love doing: singing.”

As chorus president, senior Diamond Ngyuen had a major part in making sure that the talent show was successful.
“The chorus leadership team dedicated their entire Saturday to set up outside,” said Ngyuen. “Though there was lots of heavy lifting around the school to the football field, it was a productive nine hours at school on Saturday.”
Although things had to change because of the pandemic, the students and the teachers put in a lot of effort to make the talent show successful.
“It was really fun and everyone in the show was so talented,” said Cincera. “Everyone has their own gifts and I am glad people got to show them off that night.”