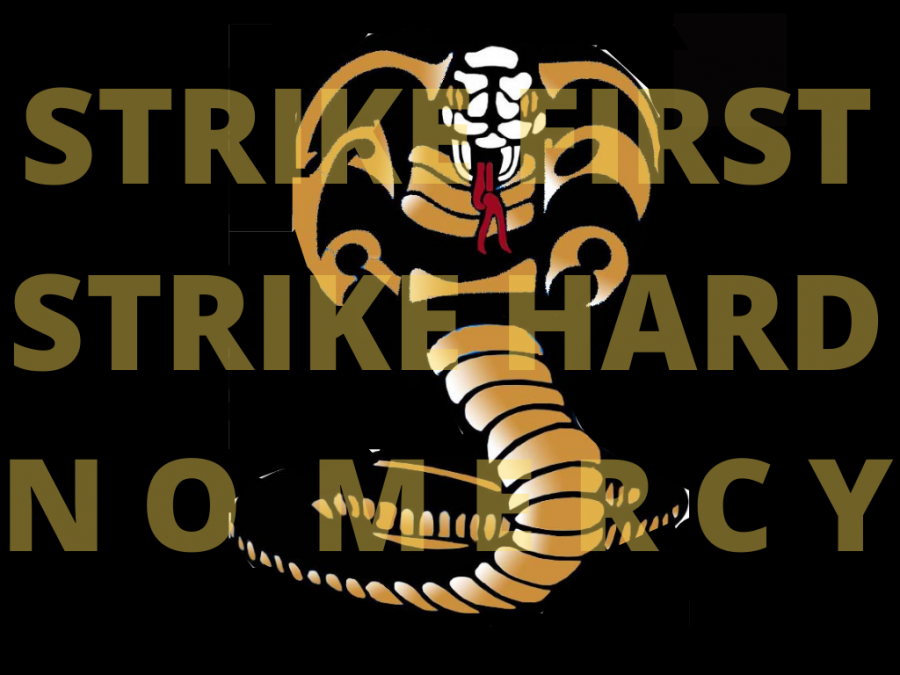 “Karate Kid” rocked the world in 1984 through the story of a young teen overcoming the odds, getting the girl and learning how to kick butt at the same time. Now, we see this story being continued on for the newer generation. “Karate Kid” is the story of Daniel LaRusso. Daniel is a young teenager who has just moved to California from New Jersey and is having a hard time fitting in. He later learns karate and that helps him break out of his shell and make new friends. “Cobra Kai” takes place 30 years after Daniel LaRusso’s (Ralph Macchio) epic victory in the 1984 All Valley Karate Tournament.

34 years is a long time to wait for a sequel in my opinion, and many people, including myself, were skeptical of how it would turn out. “Cobra Kai” is far from the first sequel that the Karate Kid franchise has attempted to make. In total, there are four already existing sequels out there. The first two continue to follow our main character Daniel, but the last two sequels follow different karate kids. “The Next Karate Kid” (1994), the fourth Karate Kid installment, includes the beloved Sensei of Daniel-son Mr. Miyagi (Pat Morita), but instead of Daniel, Mr. Miyagi is training young female Julie Pierce (Hilary Swank). “The Karate Kid” (2010), the fifth Karate Kid installment, follows Dre Parker (Jaden Smith) in his journey. The 2010 version differs from the others because instead of taking place in the United States like the other movies, this one takes place in China. When I was a kid, I remembered watching all of these movies back-to-back with the original being the clear standout. Now we are being introduced to “Cobra Kai” (2018-) which first started out as a YouTube Original Series but has since moved to Netflix.

Since I grew up watching these movies with my dad, I was more than a little skeptical when “Cobra Kai” first popped up on my radar. The original “Karate Kid” was amazing, but the story was very black and white. As watchers, we were told who to root for and who we were supposed to wish failure on. Daniel was the clear protagonist who could do no wrong and Johnny Lawrence (William Zabka) was the antagonist who had nothing but malintent. “Cobra Kai,” however, gives all of the characters a new depth. In the new “Cobra Kai” there is no clear good or bad side. The moral ambiguity is what makes this show amazing.

The pilot episode has a big focus on Johnny and is called “Ace Degenerate.” The name is very fitting because it refers to the fact that Johnny went from being the number one in high school with all the friends in the world to being a loser nobody who lives in a dump. One of the things that I loved about the show was the opening transition of Johnny eating rubber on the mat in 1984 to lying face down in bed in the present day. As the camera zooms out, the viewers can really focus on his surroundings and what has been going on in his life since we last saw him on screen. We see an unmade bed, a disheveled and hung-over Johnny, a bag of spilling chips, an old alarm clock, a bottle of beer and cheap looking pillows. During the first few moments of the show alone, we are given glimpses as to what has already happened and what might happen in the future.

One of the things that the new series has decided to add is a deep backstory for Johnny. They show us that the reason Johnny was a jerk at high school was because of a rough home life. Johnny had an abusive step-father named Sid Weinberg (Ed Asner) and a mother who died young. John Kreese (Martin Kove) was the sensei of Cobra Kai back in ‘84 and became a father figure in Johnny’s life much like Mr. Miyagi was in Daniel’s. The show also introduces new characters. The first of these characters being Miguel Diaz (Xolo Maridueña). Johnny beats up some high school bullies who were picking on Miguel in a very Miyagi-like manner and promptly gets arrested for battering minors. He is later bailed out by Sid who complains about how much of a loser Johnny is and decides to buy him out of his life. Johnny then uses this money to revamp the Cobra Kai karate dojo and takes on Miguel as his first student.

The second episode is named “Strike First,” which is a direct reference to the first rule of being in the Cobra Kai dojo. In stark comparison to the opening of “Ace Degenerate,” where we see Johnny’s life falling apart, “Strike First” starts off showing us how Daniel is living the American Dream with the background of joyful and upbeat music. Daniel has an amazing home, two amazing children, a loving wife and a successful career in selling cars. The music only stops once he realizes that the Cobra Kai dojo is coming back. During the first movies, Cobra Kai became the main source of Daniel’s pain and turmoil. All the kids that beat him up in the first movies all came from Cobra Kai. Daniel believes that Cobra Kai only produces jerks and bullies.
Once he realizes that Cobra Kai is opening again, he is so taken aback he decides to use manipulative tactics to raise the rent for the dojo so it might have to close down. This is another reason why “Strike First” is such a great title for the second episode. Even before Cobra Kai has a chance to gain new students, Daniel is already taking the necessary steps for Cobra Kai to close.

The first two episodes are great comparisons because it shows that Johnny isn’t such a bad guy after all, and Daniel also isn’t all that and a bag of chips. Both characters have good moments and bad moments. The first two episodes give us a clear picture of the past and present moments of the show and ends with Johnny and Daniel staring each other down. The final line is Daniel saying to Johnny, “You and I. This. We aren’t done,” as the rekindling of an old feud that is far from over.

“Cobra Kai” isn’t 100% perfect. Some moments in the show can seem a little corny, and some of the side characters come off as one-dimensional. One of the characters I feel like could use some depth is Robby Keene (Tanner Buchanan). Robby is the son of Johnny and later becomes a student to Daniel. It may just be me, but the way the actor delivers some of his lines seem a little corny. In some areas it feels like he’s reading an old chinese proverb rather than just speaking. Daniel becomes a mentor for Robby and many of their shared moments together can come off as a little sappy. You could also complain that the show isn’t very realistic to what life in high school is really like, but I don’t see this as much of an issue because television never claimed to accurately depict life.

Overall, “Cobra Kai” is very entertaining and I would rate it 4.5/5 stars. The only reason that I would not give it 5/5 is because I’ve never been the biggest fan of stories that revolve around miscommunication, which “Cobra Kai” very much does. My favorite Karate Kid installment is definitely still the original. The original is where it all began, and the reason this one is my favorite is because of all the nostalgia attached to it. Watching the original movie feels to me like going back to my childhood, which I very much enjoy. Despite this personal preference, I have still been able to fall in love with action and story and I am very excited to see what happens next in season 3 coming out on Netflix on Jan. 8, 2021 at 3 a.m.ET.